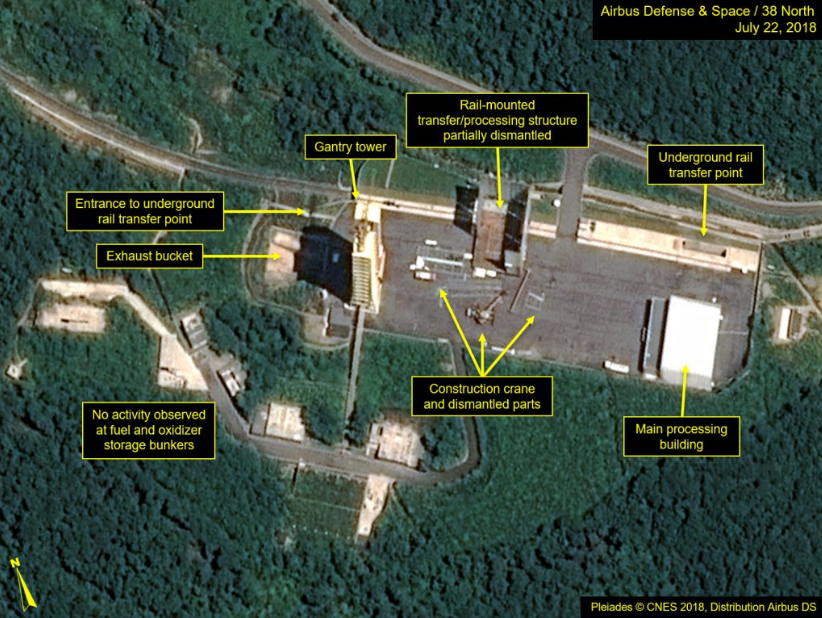 A July 22 satellite image released by 38 North on Monday shows the partial dismantling of a rail-mounted processing building at the Sohae launch site in North Korea. [AP/YONHAP] 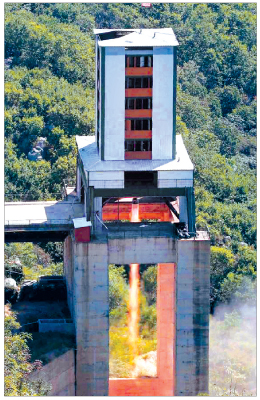 A file photo of a missile engine test at the Sohae site. [AP/YONHAP]

Joseph S. Bermudez Jr., an expert on North Korea’s weapons program, said in a report published Monday by 38 North that Pyongyang has started taking down facilities believed to have played an “important role” in the development of North Korea’s intercontinental ballistic missile (ICBM) program.

The dismantling efforts appeared to have begun sometime within the past two weeks, wrote Bermudez, who added they represented a “significant confidence building measure” on the part of North Korea. But it was unclear just how far the regime was willing to go on its promise to tear the facility down because some areas remained untouched.

Citing commercial satellite imagery from last Friday and Sunday, Bermudez analyzed that the regime has begun razing a rail-mounted processing building - where space launch vehicles are assembled before being moved to a launch pad - and the nearby rocket engine test stand that used to develop liquid-fuel engines for ballistic missiles and space launch vehicles.

The North, however, left its fuel and oxidizer bunkers, a main processing building and gantry tower intact, the report continued.

In the past, the North has launched several satellite-carrying rockets from the site, which the international community saw as a front for developing ICBMs. The Sohae Satellite Launching Ground is believed to be where the North developed the engine for the Hwasong-15 ICBM, which can reach the U.S. mainland.

When the North test-launched the Hwasong-15 on Nov. 29, 2017, it flew 950 kilometers (590 miles) after peaking at an altitude of 4,475 kilometers. If the missile was positioned at a normal angle, South Korean and U.S. authorities believe it could have flown farther than 10,000 kilometers, enough to hit the east coast of the United States. Soon after the test, Pyongyang claimed it completed its nuclear development program. The regime hasn’t tested a single missile since.

According to the 38 North report, “considerable progress” has been made in dismantling the rail-mounted processing and transfer structure. One corner was completely dismantled, with parts lying on the ground. The rail-mounted environmental shelter, which the North previously used to cover test preparations and hadn’t been moved since December 2017, has been razed and removed, and the test stand superstructure - a structure built on top of something else - was completely dismantled, leaving only the base, which is also in the process of being removed. 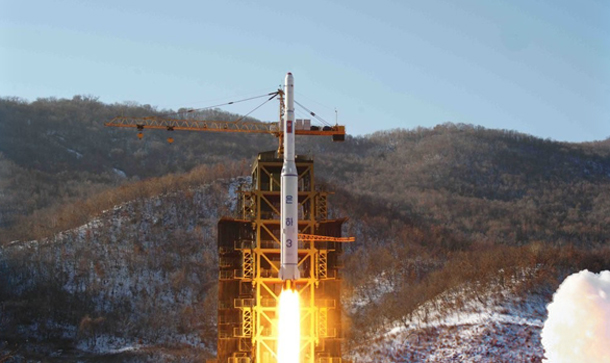 North Korean media have yet to mention the work.

A Blue House official said Tuesday on the condition of anonymity that South Korean and U.S. authorities were aware of North Korea’s actions before the 38 North report was published.

After meeting Kim Jong-un in Singapore on June 12 at their countries’ first bilateral summit, Trump told an international news conference that the North Korean leader told him he was going to destroy a major missile engine testing site. The location of the site was not given and Trump did not go into details at the time, but foreign news outlets later cited U.S. officials as saying he was referring to the Sohae Satellite Launching Ground.

“That’s a big thing,” Trump said at the time. “I said, ‘Do me a favor. You’ve got this missile engine testing site. We know where it is because of the heat.’ It’s incredible the equipment we have, to be honest with you. I said, ‘Can you close it up?’ He’s going to close it up.”

Pyongyang’s closing down of the Sohae site would be important for Trump, who’s reportedly been fretting over slow progress on the agreements he made with Kim at their summit.

The Washington Post reported Sunday, citing a half-dozen White House aides, State Department officials and diplomats, all of whom spoke on the condition of anonymity, that Trump bristled about the lack of positive developments in follow-up negotiations between the United States and North Korea.

Trump denied the report on Monday, tweeting: “A Rocket has not been launched by North Korea in 9 months. Likewise, no Nuclear Tests. Japan is happy, all of Asia is happy. But the Fake News is saying, without ever asking me (always anonymous sources), that I am angry because it is not going fast enough. Wrong, very happy!"