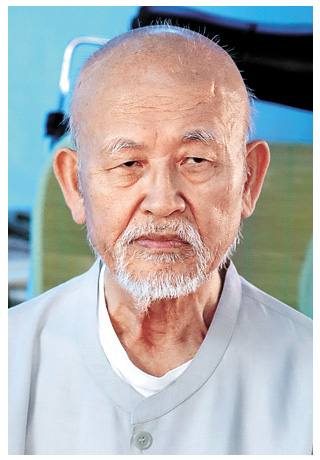 The Venerable Seoljo sits in a tent outside Jogye Temple in central Seoul on the 30th day of his fast calling for reform in the Jogye Order on Thursday. [NEWS1]

A senior monk in Korea’s largest Buddhist sect has been fasting for over a month to demand reform in the Jogye Order and the resignation of its scandal-ridden president.

Amid sweltering summer heat on Tuesday, when the high reached 34 degrees Celsius (93 degrees Fahrenheit) in Seoul, the Venerable Seoljo sat cross-legged on a straw mat inside a blue tent outside Jogye Temple, the sect’s headquarters in central Seoul.

Tuesday marked the 34th day of his fast. The 87-year-old monk said he would not relent until he received a promise from the Jogye Order’s leadership to remove its president and put an end to a series of scandals that have jeopardized the organization’s public standing in the country.

Lee Yong-sun, the Blue House’s senior secretary for civil society, visited Jogye Temple on Friday to mediate between the Jogye Order and Seoljo’s supporters, but he was met with resistance on both sides. The order’s leadership insisted that the matter should be resolved internally and rebuffed the government’s offers to intervene.

Approximately 7.6 million Koreans identified as Buddhist in the 2015 census. The Jogye Order represents the largest segment of the religion’s population, overseeing about 1,900 active temples and over 13,000 clergy members nationwide.

The order’s supreme patriarch is the 82-year-old Venerable Jinje, but real power is concentrated in the organization’s administrative headquarters, which holds complete authority over the order’s finances and administrative decisions.

Last October, the Jogye Order elected the Venerable Seoljeong, 76, as its president after a bruising internal election process in which he was accused of a host of allegations including forgery of his academic background, embezzlement of organization funds and even harboring a daughter born out of wedlock.

Last May, the broadcaster MBC aired a segment on its investigative journalism program “PD Notebook” that dug into allegations against Seoljeong and uncovered further evidence that the monk may have embezzled the order’s funds while he was spiritual director of Sudeok Temple in Yesan, South Chungcheong, to pay off the woman claiming to be his daughter over the course of a decade.

Seoljeong refused to comment with MBC but later publicly denied claims that the woman was his daughter and said he would take a paternity test to prove otherwise. So far, he has taken no actions to follow through on his promise. The sect prohibits clergy members from engaging in sexual relations or having children.

After the program aired, public outcry grew against the Jogye Order. Weeks later, a Buddhist activist and a former journalist filed a complaint to prosecutors accusing Seoljeong of embezzlement and breach of trust.

Faced with ever growing pressure both internally from dissenting monks like Seoljo and externally from the public at large, Seoljeong announced last Friday that he would step down from his position as president.

But in an about-face on Saturday, he canceled a scheduled news conference announcing his resignation. Instead, he said he would remain in office and launch a reform committee next month to overhaul the order and review his status.