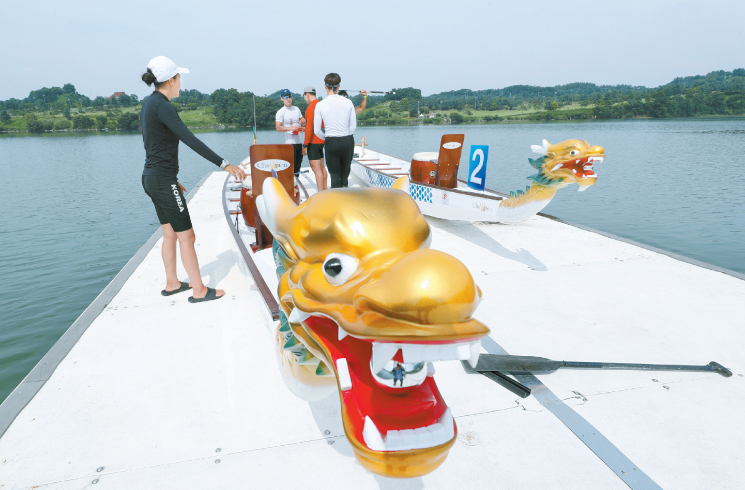 South Korean dragon boat athletes prepare for their practice at Chungju Tangeum Lake International Rowing Center in North Chungcheong on Monday. They will be on the same team with North Korean athletes at the Aug. 18 to Sept. 2 Asian Games in Indonesia. [YONHAP]

North Korean athletes set to compete on unified teams with South Koreans at the upcoming Asian Games will cross the border Saturday for joint training, Seoul officials said on Thursday.

In a press briefing, Baik Tae-hyun, a spokesman for the Unification Ministry, said a delegation of 34 will fly to the South via Beijing on Saturday. Baik said the North Korean delegation is made up of 18 in canoe, eight in rowing, four in women’s basketball — one of them a coach — and four members of the support staff.

The Korea Canoe Federation (KCF) said earlier in the day that the North Korean canoeists will begin working out with South Koreans at Chungju Tangeum Lake International Rowing Center in Chungju, North Chungcheong, on Sunday.

The Koreas have agreed to assemble joint teams in dragon boat racing, women’s basketball and rowing for the Aug. 18 to Sept. 2 Asian Games in Jakarta and Palembang, Indonesia.

Before this year, the Koreas fielded joint teams at world championships for table tennis and youth football in 1991. In the first seven months of this year alone, the Koreas competed as one in women’s hockey at the PyeongChang Winter Olympics in February — the first joint Korean team at any international multisport competition — and joined forces in table tennis at the world team championships in May and at the Korea Open tournament last week in Daejeon.

Talks on fielding multiple joint teams at the Asian Games gained traction after the inter-Korean summit on April 27. A joint declaration issued by South Korean President Moon Jae-in and North Korean leader Kim Jong-un stated that they “agreed to demonstrate their collective wisdom, talent and solidarity by jointly participating in international sports events, such as the 2018 Asian Games.”

The KCF was one of the first South Korean sports federations to express interest in a joint team with North Korea at the Asian Games. The South’s dragon boat athletes have been training since June.

In women’s hockey at the PyeongChang Olympics, where 12 North Koreans joined 23 South Koreans, some South Korean players had to be benched for a few games and only saw limited playing time to make room for the North Koreans. The KCF has noted that the unified dragon boat team won’t come at the expense of any current South Korean athletes, because both Koreas don’t have full-time dragon boat athletes and the joint team will be formed from scratch.

The dragon boat race will feature six South Korean and six North Korean athletes each in the men’s and women’s competitions.

In women’s basketball, three North Koreans — center Ro Suk-yong, guard Jang Mi-gyong and guard Kim Hye-yon — were added to the unified team, which will have nine South Koreans, on July 17. South Korea is the defending Asian Games women’s basketball champion. Ro, Jang and Kim all played in the inter-Korean friendly matches in Pyongyang earlier this month. The two Koreas swapped players on July 4 and then played against each other the following day.

In that head-to-head meeting on July 5, Ro scored a game-high 32 points in South Korea’s 81-74 victory. The center averaged 20.2 points per game to lead all scorers at the 2017 International Basketball Federation (FIBA) Women’s Asia Cup.

The South Korean team is currently in Taiwan for an international tournament called the William Jones Cup and will return next Monday. The three North Korea players will be working out on their own at Jincheon Training Center in Jincheon, North Chungcheong, until the South Koreans resume their training on Aug. 1.

The Korean Rowing Association in Seoul said the schedule for joint training with North Koreans hasn’t yet been determined, but said the rowers will be at Chungju Tangeum Lake International Rowing Center, along with the dragon boat teams.