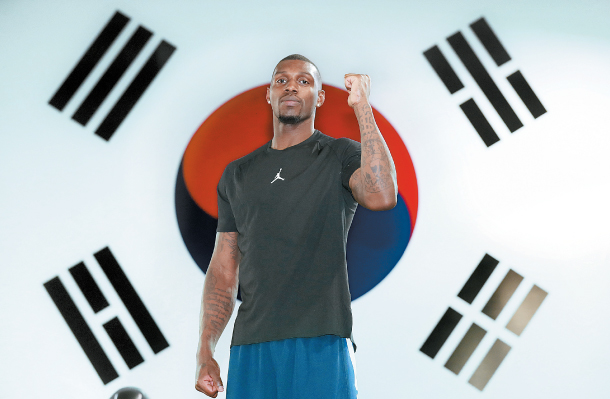 Ricardo Ratliffe, a center for the national basketball team, poses in front of the South Korean national flag. [YANG GWANG-SAM]

Ricardo Ratliffe, a center for South Korea’s national basketball team, has had a memorable year to say the least. This April and May, Ratliffe played in a North-South friendly match in Pyongyang in front of thousands of North Koreans. At first, the crowd was perplexed by his different complexion as his dark skin stood out in a sea of paler faces. But after the center drove to the basket and dunked, the mood quickly changed. 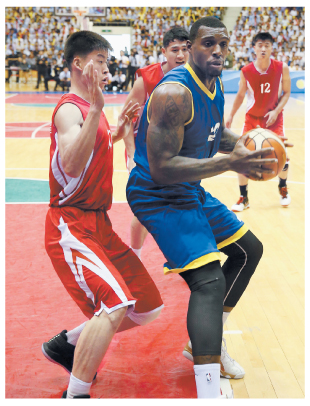 Chants of “Ra Gun-ah!” his Korean name (pending official approval), filled the North Korean stadium. Ratliffe said that he never thought that he would play a basketball game in North Korea.

The JoongAng Ilbo recently visited the Jincheon Training Center in North Chungcheong and met the star player, who is currently training with the national team.

Though born and raised in the United States, Ratliffe calls Korea his second home. For the past six years, he has only spent two months in the United States each year. His daughter Rhea was born in Suwon, Gyeonggi, in 2015. Last January, Ratliffe revealed his intention to naturalize after telling the press that he wanted a Korean passport.

Ratliffe graduated from the University of Missouri in 2012 and immediately joined Ulsan Hyundai Mobis. In his six years playing in Korea — three years at Ulsan (2012-2015) and three years with the Seoul Samsung Thunders (2015-2018) — Ratliffe averaged 18.7 points and 10.4 rebounds a game.

His strong performance led Hyundai Mobis to three straight KBL championships. During the 2016-17 season, the center recorded double-doubles in 59 straight games — a statistic that would be unheard of in the NBA. Having earned a reputation for dominance under the basket, Ratliffe obtained a Korean passport early this year through a special naturalization process for athletes.

Ratliffe’s Korean name uses the first two letters of his American last name, “Ra,” for his family name and two Chinese characters meaning “strong” and “child” for his given name — Ra Gun-ah. The name fits his powerful, almost destructive style of play. Because his name has not been officially approved yet, “Ratliffe” still adorns the back of his jersey. Once he dons a jersey that reads Ra Gun-ah instead of Ratliffe in the Asian Games, he said that he “would feel even more like a Korean.”

Ratliffe has also become acquainted with Korea’s rivalries, especially against Japan. “I heard about [the rivalry during] my first season, when I went to Japan. All the players were telling me that we have to beat these Japanese teams. When I played in the Jones Cup in 2014, I heard the same thing, that we have to beat Japan,” said Ratliffe.

Ever since Ratliffe joined the national team, its offensive ability has skyrocketed. Although Ratliffe is not particularly tall for a center, at 6 feet 8 inches, he is strong and explosive.

He is not easily moved in when skirmishes take place under the basket. In the 20 games he’s played for the Korean national team, Ratliffe has quickly become the team’s offensive anchor.

He recorded 25 points and 11 rebounds, both team highs, while leading the team to victory in last month’s FIBA Basketball World Cup qualifier against China.

Some say that the team’s dependence on Ratliffe has made the team’s offense predictable. The national team lost in its most recent matchups against Hong Kong in the FIBA Basketball World cup qualifiers and Indonesia in the Jones Cup.

Even though Ratliffe scored 43 points against Hong Kong and 22 points against Indonesia, he is not happy with losing against two of Asia’s worst teams. Ratliffe said that the key to the national team’s success “is not really about me being the center of the team, but all of us clicking.”

“My job is to help everybody out if they get beat, because I am in the middle, and to try to finish with every rebound,” he continued. “We have a pretty undersized team, myself included. I’m not a tall player, but I try to play bigger than my size and use my strength, not my height, because I am not a very big player for a center.”

When asked about his feelings about Korea, Ratliffe responded that he “loves” the nation. “I get treated very well here, with a lot of love from fans and teammates and the country in general, so I don’t think [my love for Korea] is going to change,” he said. Ratliffe has his sights firmly set on winning gold in Indonesia. “[Winning gold] would be a very big accomplishment for me. It might be my biggest, actually.”