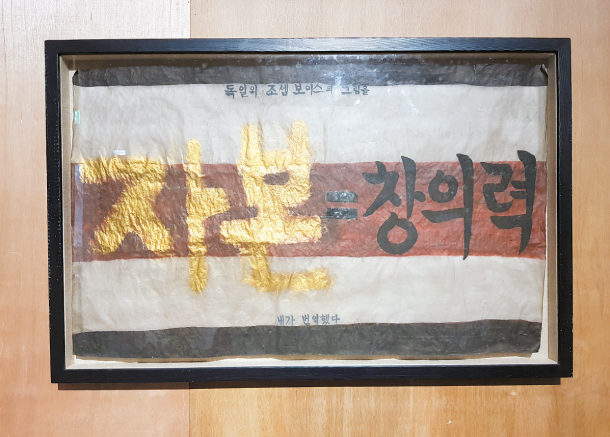 “Capital=Creativity” is a work by pioneering Korean conceptual artist Bahc Yiso and part of his retrospective which starts today at the MMCA Gwacheon. [MOON SO-YOUNG]


An acrylic painting now on view at the National Museum of Modern and Contemporary Art (MMCA) Gwacheon, is covered in large text. It reads “Capital = Creativity” in Korean. “Capital” is written in a gaudy gold. The upper and lower parts of it are two small texts that read, “The drawing by Joseph Beuys of Germany” and “translated by me.”

This is a work from pioneering Korean conceptual artist Bahc Yiso (1957-2004) in 1986. He intentionally changed the order of the words in Beuys’s work, which are originally “Creativity = Capital.” Bahc’s “Capital = Creativity” also makes sense, and leaves a bitter aftertaste about the art world being easily influenced by capital.

The work is part of a retrospective of Bahc, which starts today at the National Museum in Gwacheon, Gyeonggi.

“The exhibition is built around extensive archives and works donated by Bahc’s family in 2014,” Lim Dae-geun, curator of the show, said in a press preview on Tuesday. The exhibits based on the donation include not only Bahc’s works and notes with plans for the drawings but also his lecture materials, exhibition records and even a jazz library self-recorded and edited by the artist.

“His notes with drawings for artworks are so detailed and so beautiful in themselves,” Lim said. 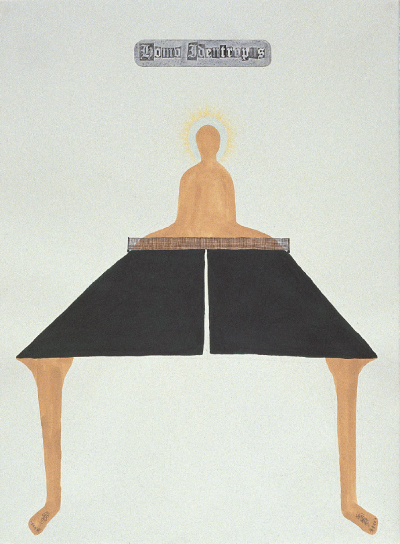 Bach Yiso’s “Homo Identropus” is a kind of self-portrait. It is part of the retrospective of the artist, who passed away at the age of 47 in 2004, in the MMCA Gwacheon. [MMCA]

Viewers can experience them through digitalized images on touchscreens installed beside the real notebooks displayed in glass boxes. This is good news to students of art and art theory in particular, as Bahc is one of the most influential figures for young Korean contemporary artists and curators. Bahc introduced the concepts of postmodernism to Korea in the early 1990s.

“Bahc played a momentous role in the development of Korean art in the 1980s and 90s, not only as an artist but also as an art critic, curator and educator,” Bartomeu Mari, director of MMCA, said in the press preview.

Among the exhibits are the installation works Park presented at the Venice Biennale’s Korean Pavilion in 2003. He also showed works at exhibitions including the Gwangju Biennale (1997), Taipei Biennial (1998), and Yokohama Triennale (2001), until he died of a heart attack in 2004.

Among the exhibits are also Bahc’s irony-filled installation works, such as “Your Bright Future” (2002), made up of 10 electric lamps whose lights are directed at one spot on the gallery’s wall. The spot is too bright and nothing is seen but light, like a vague vision of success.