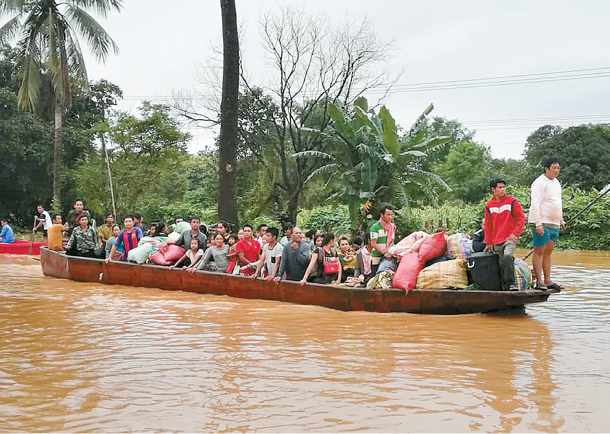 Korean President Moon Jae-in ordered a rescue team to Laos where hundreds of people went missing and some were confirmed dead after a dam partially fell down and washed away nearby villages.

“Although the exact cause of the accident hasn’t been confirmed, the government should carry out emergency relief measures since a Korean company is involved in the project,” President Moon was quoted as saying on Tuesday.

As of Wednesday afternoon, 19 people had been found dead and more than 3,000 needed rescuing in some form, according to state-run media Vientiane Times, citing the local district government.

On Monday evening, one of five auxiliary dams being built by SK E&C fell down after days of heavy rain.

While foreign press reports almost unanimously held SK E&C responsible for the crisis, saying the failed dam “collapsed,” SK E&C claims that the dam didn’t collapse but was overflowed due to days of unprecedented heavy rain.

“Collapse indicates the dam completely fell down, but the situation was not like that,” said a spokesman for SK E&C on Wednesday.

“An upper part of the dam was swept away due to heavy rain and the water finally overflowed,” the spokesman added.

“The lower part of the dam is still there and we are figuring out how much of the dam’s upper part was swept away when the overflow actually broke out on Sunday.”

According to SK E&C, the construction company spotted deterioration in the upper part of the auxiliary dam on Sunday evening and started evacuating nearby villages right away. It also started repairing the lost part the same day, which the company said “didn’t proceed effectively,” due to heavy rain.

On Monday morning, it opened an emergency outlet of the main dam to lower the water level, but spotted more deterioration of the auxiliary dam’s upper part in the evening, which eventually resulted in an overflow.

On Tuesday morning, the company confirmed that seven out of 12 nearby villages were flooded.

The headquarters of SK E&C in Seoul and the Laos office launched an emergency committee to carry out relief activities at the site, including dispatch of additional staff, helicopters, boats and medical kits.

“With the cooperation of the Laos government, SK E&C will put its best effort into preventing further damage and find out the cause of the crisis,” the company said in a statement Wednesday.

In 2012, SK E&C formed a consortium named Xe-Pian Xe-Namnoy Power Company (PNPC) with Korea Western Power, Thailand-based RATCH and Laos-based LHSE to build a hydroelectric dam with a capacity of 410 megawatts scheduled to start operating in 2019.

The construction, which started in November in 2013, was 92.5 percent completed as of July.
President Kim Byung-sook of Korea Western Power, the company meant to manage the dams in Laos for 27 years, said Wednesday that some deterioration in the small dam was spotted as early as Friday, two days earlier than what SK E&C has been claiming.

“On July 20, 11 centimeters [4.3 inches] of the top of the auxiliary dam built for the Xe-Namnoy reservoir was spotted to have been sunken,” reported Kim to the Trade, Industry, Energy, SMEs and Startups Committee on Wednesday. The extent of the damage was within the tolerance range, which is why the local construction team didn’t immediately initiate restoration measures, according to Kim.