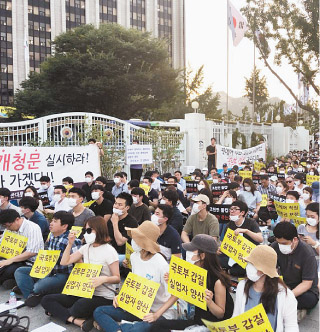 Korean Air’s low-cost carrier Jin Air is pulling out all the stops to prevent the government from taking away its business license.

Employees from Jin Air protested against the Ministry of Land, Infrastructure and Transport at Gwanghwamun in central Seoul from 7 p.m. on Wednesday. The rally comes ahead of a hearing to discuss whether to strip Jin Air of its business license scheduled on July 30.

About 300 employees were in attendance when the rally kicked off, according to organizers.

“The Transport Ministry is threatening the lives of thousands of Jin Air employees to avoid taking responsibility for [their mistakes],” Jin Air employees said in an official statement Wednesday. “We cannot forgive the ministry for turning a blind eye to Asiana Airlines hiring a foreign board director for six years.”

On Monday, the company also requested that the ministry hold a public hearing, rather than handling the issue behind closed doors, considering that the decision will affect the lives of all Jin Air employees as well as that of its contractors.

According to the airline’s employees, the Transport Ministry has banned Jin Air from any new business ventures, preventing the carrier from launching any new routes during the busy summer peak season.

The controversy over Jin Air surfaced after Korean Air heiress Cho Hyun-min, who served as the registered director at the budget airline between 2010 and 2016, was found to be an American citizen earlier this year. Under the Korean aviation safety law, a foreign national cannot serve as a registered board director of a Korean airline for security reasons and the violation could result in the revocation of the airline’s business license.

Jin Air employees began lobbying the government not to revoke their business license shortly after the revelations about Cho emerged in April this year. The controversy deepened earlier this month after details emerged that Asiana Airlines had apparently committed the same infraction - appointing American citizen Brad Byungsik Park to their board from March 2004 to March 2010 - and the Transport Ministry announced that they would not be investigating the Asiana case.

The ministry said Asiana’s case is different because Park left the company in 2010 and it wasn’t mandatory for the ministry to revoke licenses until July 2012. The government also added that Asiana renewed its business license in 2014 with Park already gone and has been operating since without grounds for disqualification.

However, Jin Air employees argue that it was partly the government’s mistake for not catching the violation while Cho was on the board.

They also claim that the ministry is giving favors to Asiana, citing aviation regulations between 2004 and 2008 that said that business licenses should be revoked. While the law did give some discretion on punishing airlines between 2008 and 2010, the law still mandated that an airlines operations be stopped, according to Jin Air employees.

Jin Air also renewed its license in February 2016, but Cho stayed on the board until March that year.