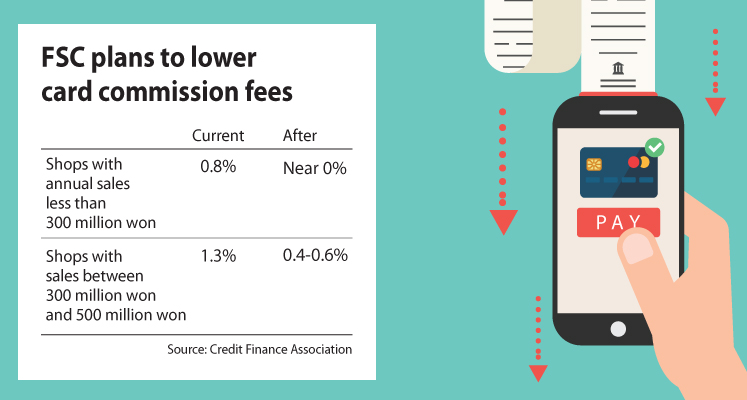 Card companies are reeling after the government pushed forward the idea of lowering card commission fees to nearly zero percent for small shop owners in a bid to offset the costs associated with the steep hike in the minimum wage.

Choi Jong-ku, head of the Financial Services Commission, announced on Wednesday that the regulator will move to push down credit and debit card fees when it sets the rate this year.

The move corresponds with the Finance Ministry’s announcement that it will launch an integrated payment system for mom-and-pop store operators. Tentatively named Zero Pay, the platform is designed to charge no fees in cooperation with major financial institutions including Kakao Pay, BC Card, Shinhan Bank and Woori Bank.

Choi has yet to reveal specific rates, but industry insiders indicated that the regulator will aim to get as close to zero percent as possible.

“We’ve heard that the government aims to lower the rate to 0.3 percent for shops with less than 300 million won in sales, while stores with sales between 300 and 500 million won could see the rate reduced to around 0.5,” said a source at a card company.

Another source at a leading card company accused the government of “politically using” card companies to defend a half-baked policy that has triggered criticism from the industry circle.

“We’ve been forced to reduce commission fees over the past 10 years since the conservative presidents took office,” said the source who refused to be named.

“But I want to question if the move really helped shop owners,” the source said. “Many shop owners with less income already pay no or little card commission fees when factoring in the tax deductions they receive.”

The source explained that the former Park Geun-hye and Lee Myung-bak administrations also advocated lower commission rates, but the degree of the cut is expected to be larger under the Moon Jae-in government.

“The conservative governments tend to gradually lower rates, but the Moon administration appears to be pushing for a more radical cut, which threatens the card industry.”

In an apparent response to the complaint, Choi said that the Financial Services Commission will allow card issuers to enter new businesses in exchange for the anticipated losses.

“It is a viable idea that the regulator allows for more revenue sources to ease the impact that the lower commission fees will have on the industry,” said Choi during the regulator’s regular report to members of the National Assembly on Wednesday.

The chairman cited the credit rating business as a possible new area that card units could expand into.

“Card companies could draw on their strength in big data if they are allowed to expand into credit rating,” he said.