Looking back through life’s choices : In ‘Ghost Walk,’ a young woman learns how her decision affected others

Looking back through life’s choices : In ‘Ghost Walk,’ a young woman learns how her decision affected others 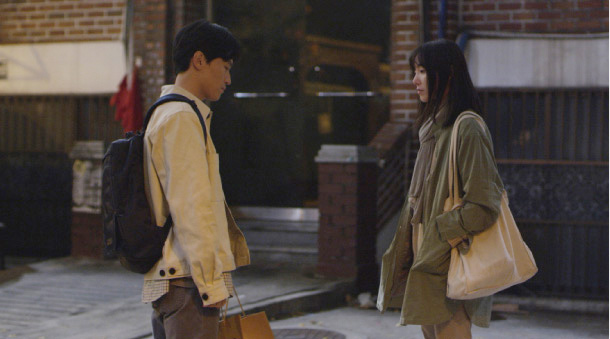 “Ghost Walk” sheds light on the changes a struggling young woman named Hye-jeong, right, could have made in both her and others’ lives if she had made different choices. [BUCHEON INTERNATIONAL FANTASTIC FILM FESTIVAL]

Fantasy horror movie “Ghost Walk” starts off showing the struggles of a distressed young woman, giving the impression that it will be another overabundant film about youth’s unwinnable battle against social inequalities. Though the struggles of young people play an important role in the film, its core focus is on the changes the woman could have had in both her and other people’s lives if she had made different choices.

The movie, which was screened in Gyeonggi at the 22nd Bucheon International Fantastic Film Festival that wrapped Sunday, calmly and lyrically delivers most of the story in reverse chronology through the eyes of the young woman who has become a ghost.

Self-pitying Hye-jeong is a lethargic young woman working at a factory located on the outskirts of a city. Though there are many new residences being built near where she lives, none of them seem to be affordable - at least to anyone she knows - so she shares a place with two roommates.

Reticent and often seemingly emotionless, Hye-jeong repeats her routine without having any vitality or purpose in life.

She severed ties with family, has no friends and even refuses to date anyone. When her coworker confesses his romantic feelings towards her, Hye-jeong blandly rejects him without a second thought, saying “I’m not interested in dating or marriage. Work is tiring enough, and I don’t think I’ll be able to do that kind of thing so well.”

Locking herself in her own world is part of Hye-jeong’s attempt to protect herself from society, where individuals are endlessly encouraged to chase after money, relationships and dreams. That explains her negligence to help a young girl who desperately shouts for Hye-jeong’s help in a narrow alleyway, and her refusal to provide financial help to her roommate without properly hearing out her dire situation.

But things take a turn in the movie when Hye-jeong is stabbed and falls unconscious. While her body is hospitalized, Hye-jeong becomes a ghost. She travels backward in time and roams around the area she lives.

While traveling through her final few days, Hye-jeong, for the first time, sees the pain of those around her, who seems to be going through situations that are just as painful as her own. She is able to objectively see how she behaved and reacted to their requests for help.

She then realizes how she could have prevented these situations from turning worse, including her own death, by paying the slightest attention to the people around her who were driven to the brink of death when they asked Hye-jeong for help.

Directed by Yu Eun-jeong, ”Ghost Walk” captures the pain and the struggles commonly faced by today’s youth, including financial difficulties, lethargy, a gloomy outlook towards their own future and the fears of safety, especially for women walking alone at night. But the movie, nevertheless, grasps onto a sense of warmth and hope by providing different perspectives of the same incidents through the eyes of a time traveling ghost.