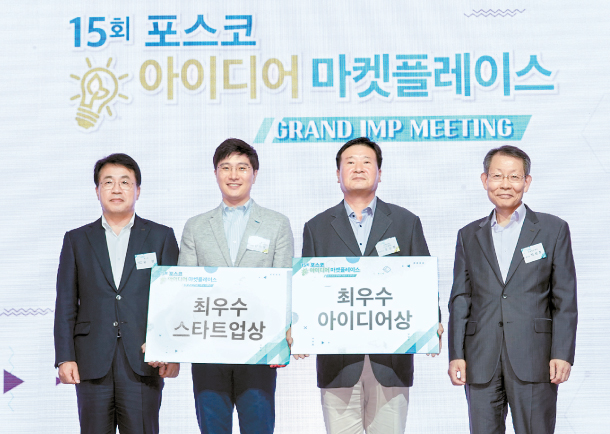 Representatives of Designoble and A RUN receive awards at the 15th Posco Idea Marketplace on July 4 at the Posco Center in Gangnam, southern Seoul. [POSCO]

Posco is working closely with its contractors to ensure the mutual growth and development of all suppliers and companies within its network.

Since September 2017, Posco has increased its outsource spending by about 100 billion won ($88.7 million) to ease the pressure on contractors struggling to deal with the minimum wage hike. This spending will be gradually increased to ensure that the companies are not damaged by future wage hikes.

The increase in spending came at the recommendation of the Posco Family Co-development Supporting Organization and allowed Posco to set an example of the successful implementation of the government-led drive to treat contractors fairly. The initiative is also expected to contribute to the Blue House’s income-led growth policy and increase job creation.

Posco’s decision to increase spending was possible because of the cooperation of its labor union. Posco’s labor union is proud to lead an example in resolving national dilemmas and social polarization. It expects to be a good model of cooperation and harmony that encompasses the contractor relationship.

As part of this process, Posco will no longer blindly accept the lowest bidder during its procurement process for steel mill facilities and materials. The old system caused excessive competition, forcing contractors to constantly lower prices and ultimately harming suppliers’ profitability, product quality and even causing industrial accidents.

Posco abolished this system in March this year and has instead adopted the “lower limit bidding system.” It is the first chaebol to do so.

Since 2015, Posco has committed to make public all business information, competitive bids and record requests. This commitment will ensure that the new procurement process is fair and transparent.

Posco also agreed in April last year to share technology with small and medium-sized enterprises (SMEs) to encourage mutual growth. It shared information on 300 leading technologies and transferred 83 patents to 24 firms for free.

Along with the Ministry of Trade, Industry and Energy and the Korea Institute for Advancement of Technology, Posco promised to foster a cooperative society by continuing to support SMEs.

The company has been pushing this mutual development since the 1990s. Sharing information and technology with SMEs allows Posco to improve their industrial structure and automatic technology development. Simultaneously, the conglomerate would also secure its competitiveness and improve quality in the long term.

Posco has been pushing for conglomerate and SMEs’ mutual development since 1990s. “Benefit sharing,” which Posco has introduced for the first time, received favorable evaluation in a way that helped SMEs improve industrial structure and learn automatic technology development. At the same time, benefit sharing helps conglomerates secure competitiveness and quality improvement in the long term.

Since 2006, Posco has been offering technology assistance to smaller companies free of charge. Posco has offered advice to 36 companies on 140 separate occasions. The Posco WinC system also helps spread mutual growth from contractors to subcontractors and improves the terms of payment between them.

Externally, the Posco Honored Partner (PHP) fosters selected companies based on their performance and contribution to global suppliers. Posco offers various benefits to selected partners such as PHP certificates for marketing support and relief on contract-related deposit payments.

Posco’s Idea Marketplace has been running as a venture support program since November 2011. The program supports young entrepreneurs and start-ups as an incubator and angel investor.