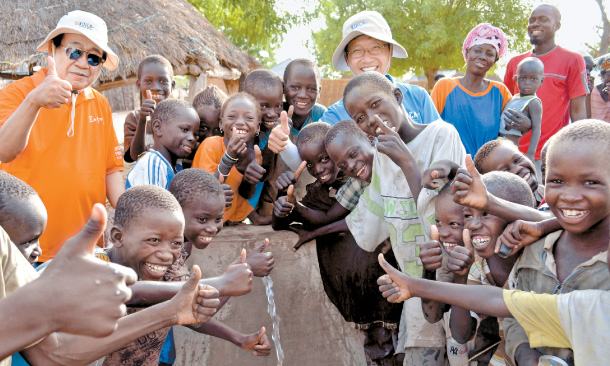 Volunteers from Koica and people in Senegal strike a pose in June 2013 after building a water fountain together in their village. [KOICA]

Koreans often retire from their jobs at a relatively early age - commonly in their late 50s. Many become entrepreneurial and open a coffee shop or restaurant. The well off cultivate hobbies. And others volunteer to work abroad.

In 2016, Lee Han-kook went to Myanmar to teach future car mechanics at Pyay University. Now 67, Lee has spent two years teaching students how to disassemble and reassemble car engines. People like Lee, with years of experience in their fields, are welcomed in places like Pyay, which has few car maintenance specialists.

“I’m so happy to see these students get hired at car repair centers,” Lee says, “and pursue real careers with the help of what I taught them.”

He was sent to Myanmar by the Korea International Cooperation Agency (Koica), a government agency dedicated to combating poverty and improving socioeconomic growth in developing countries.

It’s Korea’s version of the U.S. Peace Corps, and like that institution, its volunteers are no longer all wide-eyed college graduates.

Koica provides its volunteers with allowances, housing and medical insurance. While the allowance is not huge, many volunteers say it is more than enough to live in rural neighborhoods of developing countries, where prices are lower and there are fewer things to do. The agency also sends money monthly to volunteers’ Korean bank accounts to use after their work is finished.

Some members continue their work after they return to Korea. Jun Ok-joo, a former cosmetology professor, taught hairdressing in Indonesia for four years. After she returned home, she started her own company, With JOJ, which teaches cosmetology to immigrant women in Korea.

Eom So-hee volunteered in Kenya and Cameroon. After witnessing severe unemployment among young people in those countries, Eom launched a social enterprise, Kijami Table, to provide jobs for them. The enterprise provides African food at reasonable prices to local communities. She is also planning to start a restaurant in Rwanda.

Korea, once a developing country badly in need of foreign aid in the mid 20th century, is now second in the world in sending volunteers abroad.

With the cooperation of Koica and other non-profit and religious organizations, Korea sent approximately 6,320 volunteers overseas in 2016. It fell close behind the United States, which sent around 6,910 volunteers abroad that year, according to Koica.

While Koica has seen a spike in the number of older volunteers, its younger volunteers are diminishing. At a time when jobs are harder to get, young people think they will lose job opportunities in Korea if they go abroad, Jang Jae-yoon, general manager of World Friends Korea, said.

To help both the organization and younger workers, Koica “is striving to make volunteering abroad a great experience and an asset for people when they apply for jobs in the future,” said Lee Mi-kyung, chairwoman of Koica.