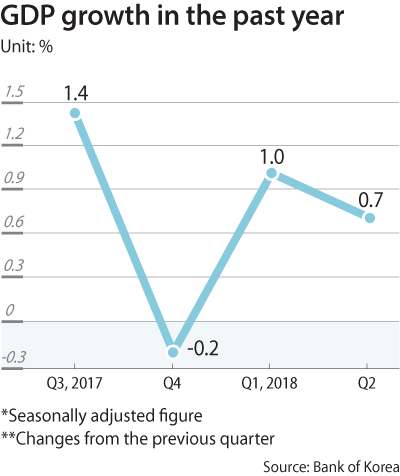 Korea’s economy slowed down in the second quarter, raising concerns that its annual growth may not meet the target set by the government.

According to data from the Bank of Korea on Thursday, Korea’s gross domestic product (GDP) grew by 0.7 percent in the second quarter compared to the previous quarter, a decline from the 1 percent gain it posted from January to March this year.

The growth was led by consumption from both the private and public sectors.

Exports also increased slightly, albeit less than the previous quarter.

In the second quarter, outbound shipments, centered on exports of semiconductor, petroleum and coal products, rose by 0.8 percent. In the previous quarter, the country’s exports had expanded by 4.4 percent.

What dragged down the expansion of the economy was the notable fall in investment.

The data indicated that overall investment retreated by 2.7 percent from April to June this year.

“The drop in facilities investment comes especially as a shock,” said Yun Chang-hyun, a professor of business at the University of Seoul. “Investments to build factories and buy machines are activities that look to the future and the decline indicates companies are uncertain about their future.”

“We will have to see whether this is only a temporary thing or the stagnation is here to stay,” Yun added. “But there haven’t been any predictions [by local think tanks] that the economy will improve in the second half, which is disconcerting.”

Experts say that unless local companies shrug off uncertainties about their future, it will be difficult for the country to achieve its target annual growth of 2.9 percent.

“The shrinking investment is reflective of the uncertainties that local companies feel, especially about the policy-direction of the government,” said Sung Tae-yoon, professor of economics at Yonsei University. “At this pace, it would be impossible for the country to achieve its annual growth target.”

The government has already downgraded its target growth for the year from 3.0 percent to 2.9 percent.

“The country posted 2.9 percent growth until June, similar to the potential growth that the government predicted,” said Kim Dong-yeon, Korea’s finance minister and deputy prime minister for the economy, during a meeting with reporters on Thursday at the Sejong government complex. “But I think there is a disparity between the growth we see and the economic condition that the general public feels.”

“The biggest reasons are the issues involving employment and income distribution,” he added. “The government will do its best to improve the quality of the growth so that the public can feel the improving economy.”