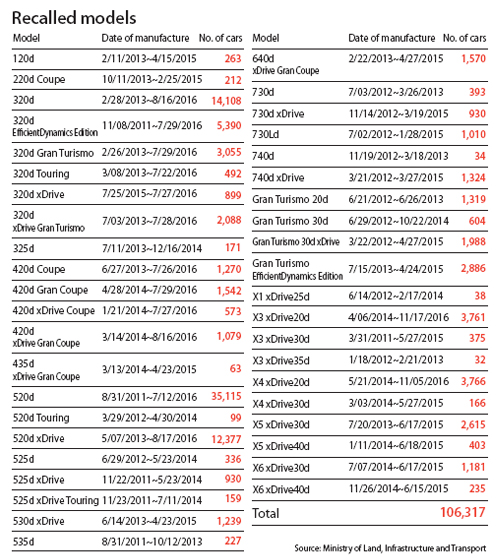 BMW Korea will voluntarily recall its fire-prone 520d vehicles and other models amid intensifying worries among Korean BMW owners.

More than 15 BMW 520d models burst into flames this year, eight of which happened this month. A total of 27 cases of fire hazards happened this year among all BMW models.

The Ministry of Land, Infrastructure and Transport announced Thursday that BMW Korea will recall 106,000 cars among 42 models including the 520d. The problem is a faulty EGR module.

EGR, short for Exhaust Gas Recirculation, is a system that recirculates a portion of gas emissions to the manifold pipe to reduce the amount of nitrogen oxide emissions.

There have been several BMW recalls in other regions due to risk of vehicles catching fire such as in Britain early this year and in North America last year. But Korea is the only country in which burning BMW vehicles were recalled due to faulty EGR modules.

“After a close investigation with BMW headquarters, we found that the EGR module could lead to a risk of fires,” BMW’s Korean unit said in a written statement Thursday.

“We are looking into why there are so many faulty EGR modules in the Korean market, but the exact reason hasn’t been found yet,” a spokesman for BMW Korea said.

A total of 35,115 units of the 520d model manufactured between 2011 and 2016 will be subjected to recalls. BMW Korea said it will recall other models that use the same defective part. The recalled models include the 320d, 420d Coupe, 730d as well as the xDrive editions of its SUV lineup including the X3 and the X5.

The Transport Ministry said it “suspects” the fires broke out due to faulty EGR modules but has not completed its investigation yet.

“It might take more than months to exactly figure out the cause of the fire accidents,” an official from the ministry said. “Due to intensifying anxiety among BMW owners in Korea, the recall has been announced preemptively,” the official added.

The recall will start on Aug. 20 after BMW Korea is stocked with enough replacement parts. Until then, the company will offer additional emergency inspections starting today at four official dealerships for owners who want immediate checkups on their vehicles.

Technicians will inspect the vehicles and replace the EGR if defects are detected. Less panicky owners can wait until Aug. 20 to get their EGR replaced.

In the case of the cars that caught on fire, BMW Korea said it will compensate owners with the cash equivalent of the model’s market value in the secondhand car market.

“With cooperation with the Transport Ministry, BMW Korea decided to roll out a voluntary recall,” said BMW Korea Chairman Kim Hyo-joon in a written statement Thursday.