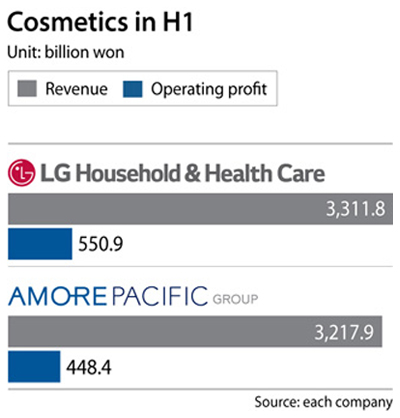 The top two domestic beauty companies have posted strong second quarter earnings, indicating that they are finally recovering from the loss of Chinese customers following the Thaad deployment last year.

Both Amorepacific and LG Household & Health Care announced their earnings this week, with LG taking the lead with record-high second quarter earnings.

Amorepacific Group’s second-quarter earnings released Thursday showed that the beauty giant finally made a turnaround for quarterly results. It raised 170.3 billion won ($152 million) in operating profits, a jump of 30.6 percent from the same period last year, and 1.55 trillion won in revenue, a 10 percent increase year on year.

The company has recorded minus growth in both revenue and operating profit for the last four quarters.

Amorepacific was hit hard by the installment of the U.S.-led Terminal High Altitude Area Defense (Thaad) antimissile system here that caused Chinese consumers to boycott Korean brands and a suspension of group tourists entering the country. Prior to the Thaad deployment, China made up 70 percent of Amorepacific’s overseas revenue.

The incident spurred the company to diversify its global business portfolio. Thursday’s second quarter results showed that efforts made last year are slowly starting to bear fruit: Operating profit from overseas businesses rose 129.3 percent on-year and revenue was up 16.7 percent.

“The Asian market saw two-digit growth thanks to more luxury brand stores and localized products,” said Amorepacific in a statement. “The advancement of Innisfree and Laneige in the United States expanded our customer base.”

Despite improved second quarter earnings, the company’s performance in the year’s first half retreated from last year. Revenue for the first six months was slightly down by 1.5 percent on-year to 3.22 trillion won and operating profit reduced 11.9 percent to 448.4 billion won.

The general consensus among analysts was that Amorepacific’s earnings will improve thanks to a base effect from last year and relations with China having improved. The question is when. Some experts remarked that the speed of recovery so far has been slower than expected, partly because the number of Chinese tourists has not returned to pre-Thaad levels.

LG Household & Health Care, announced Tuesday a record result for the first half thanks to its strong luxury brands that helped maintain sales among Chinese consumers. Its revenue rose 8.7 percent year on year to 3.31 trillion won and 12 percent in operating profit at 550.9 billion won.

It also broke a record in the second quarter with revenue of 1.65 trillion won, an 11.1 percent rise from last year, and operating profit of 267.3 billion won to represent a 15.1 percent increase. Seventy-three percent of the operating profit came from its beauty business, an increase from last year’s 65 percent. Its beverage business accounted for 17 percent and 10 percent for daily necessities.

LG said The History of Whoo, a best seller in China, reached 1 trillion won in revenue as of July thanks to high duty-free sales. Its SU:UM and O HUI also successfully appealed to Chinese consumers as luxury brands, contributing to a 36 percent increase year on year in the company’s cosmetics sales overseas during the second quarter.

Analysts generally had a positive outlook on the company’s strong luxury line as consumption of premium beauty brands in China is rapidly rising.

“Luxury brands are expected to lead [LG’s] revenue growth in the second half,” said Yoo Min-sun, an analyst at Kyobo Securities. “The company’s annual growth rate for duty-free revenue in 2018 is likely to reach 40 percent year on year.”