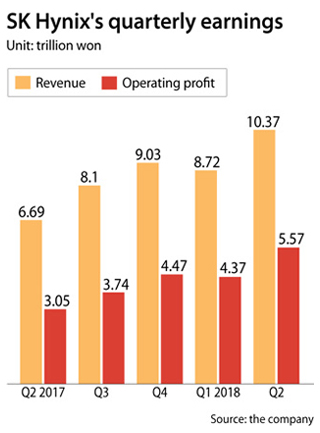 SK Hynix posted all-time highs in revenue and operating profit in the second quarter as its shipments of memory chips continued to grow rapidly.

The world’s second-largest memory chip maker said in a regulatory filing on Thursday that its revenue for the April-June period grew by 55 percent year on year to 10.37 trillion won ($9.26 billion) and operating profit surged 83 percent to 5.57 trillion won for the same period. The figures exceeded 10.19 trillion won in revenue and 5.29 trillion won in earnings predicted by analysts surveyed by FnGuide, a market data provider.

SK Hynix’s operating margin for the second quarter was 53.7 percent, up from 50.1 percent in the first quarter and close to Samsung Electronics’ first-quarter operating margin of 55.6 percent.

DRAM shipments increased by 16 percent over last quarter amid robust demand for server and PC DRAM, and average prices advanced by 4 percent, according to SK Hynix. Shipments of NAND flash memory chips also rose by 19 percent over the previous quarter, propped up by growing demand for NAND with greater density from Chinese smartphone manufacturers as well as for solid state drives (SSDs).

Despite some pessimists’ concerns over the impending end to the so-called semiconductor supercycle, due in large part to oversupply from Chinese manufacturers, SK Hynix has an optimistic outlook for the third quarter.

Lee Myung-young, vice president of SK Hynix, said in a conference call on Thursday that the firm set a goal of raising the shipments of DRAMs by over 20 percent and NAND flash chips by over 40 percent compared to last year.

He also said SK Hynix will complete the construction of a new 3D NAND flash memory factory in Cheongju, North Chungcheong, by September, earlier than scheduled. When it grows into full operation at the beginning of next year, the company’s annual 3D NAND flash supply will grow by over 40 percent, the company said in April.

Shares of SK Hynix ended 2.48 percent higher, at 82,500 won, on Thursday. The company shares fell since late May from a high of 95,300 won on May 23, as investors began fearing reduced DRAM prices and memory chip oversupply.

“Concerns still linger over the chip industry having passed its peak, but the recent fall in SK Hynix share prices has been excessive,” said Park Yoo-ak, an analyst at Kiwoom Securities.

The high demand for memory chips will continue amid ongoing progress in artificial intelligence and Internet of Things technologies, most experts believe.