Sunken ship’s treasure isn’t quite so much

Sunken ship’s treasure isn’t quite so much 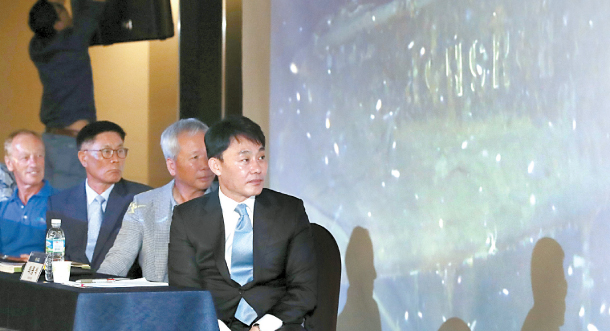 The company claiming to have found sunken Russian warship Dmitri Donskoi admitted Thursday it has yet to find any treasures aboard, backtracking on its announcement last week that the ship held gold worth 150 trillion won ($131.8 billion).

“I sincerely apologize for irresponsibly saying that the ship was carrying treasures worth 150 trillion won,” said Shinil Group CEO Choi Yong-seok during a press briefing held at the Sejong Center for the Performing Arts in central Seoul. “My company had been using a phrase that was already being circulated in the media and used by a public organization without confirming its veracity.

“We are nevertheless confident that the Donskoi holds highly valuable materials,” Choi continued, “in light of various companies’ attempts to discover the ship and our divers’ reports that they saw boxes tied tightly together with rope.”

The company does not yet have approval from the government to remove objects from the ship. Choi added that he now estimates the Donskoi’s treasures to be worth around 10 trillion won maximum, taking into account current gold prices.

“Our next plans include sending documents concerning our discovery to the Russian government through official routes,” Choi said. “We will also work closely together with relevant organizations to certify our status as the first discoverer of the ship and gain approval for excavating buried objects. We expect salvaging the ship to cost us under 30 billion won.”

After Choi’s address, the company played several minutes of footage of its search for the ship underwater, including shots showing the name “Donskoi” written on the ship. Shinil Group claimed that the ten Canadian, British and Korean expert divers recruited for the discovery were lucky and found the ship only two days after beginning the search. Some of the divers were present at the briefing.

A representative of the salvage team went on to compare pictures it took of the Donskoi to ones taken by Dong Ah Construction Industrial Company, which claimed to have discovered the ship along with the Korea Institute of Ocean Science & Technology (Kiost) as early as 2003. Highlighting how vessel features such as the mast, steering engine and quarterdeck in Dong Ah’s pictures were different from historical depictions and pictures taken by Shinil, the representative concluded that the ship Dong Ah and Kiost had found was not the Donskoi. 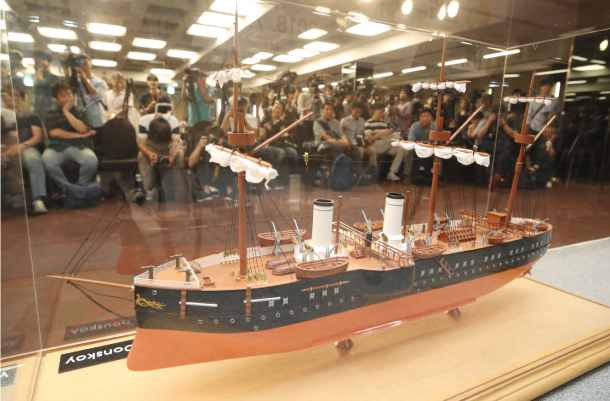 A model of the Dmitri Donskoi is on display at the press conference. [YONHAP]

Shinil Group has been at the center of heavy media attention since it claimed to have found the Donskoi on July 15 near Ulleung Island in the East Sea.

Russian soldiers had scuttled, or deliberately sunk, the warship in 1905 to prevent it from being captured by Japanese forces during the Russo-Japanese War, sparking speculation that the ship contained things of value the Russians wanted to keep from enemies.

However, Shinil’s association with a cryptocurrency exchange and the timing of Dmitri Donskoi’s discovery, which came just two weeks after major Shinil shareholders acquired steel company Jeil Steel, had raised suspicions about the company. Jeil Steel’s share price nearly doubled on news of the ship’s discovery.

Choi addressed these concerns during the briefing. “Shinil Group was founded on June 1 for the purpose of filming a documentary on the Dmitri Donskoi,” he said. “I and former CEO Ryu Sang-mi made personal investments in Jeil Steel. Shinil Group has nothing to do with either Jeil Steel or Shinil Goldcoin.”

“On Thursday, Shinil Group’s name was changed into Shinil Marine Technology Corporation in an effort to improve the company’s poor image,” said Choi. “I will also be replacing Ryu Sang-mi as CEO from today.”

Choi, however, left many questions unanswered, such as how his company planned to procure funds for salvaging the ship. Choi only said Shinil is getting many calls inquiring about investment opportunities into the company.

The police also launched an investigation into Shinil on Thursday after another company made a civil complaint against it for fraud.