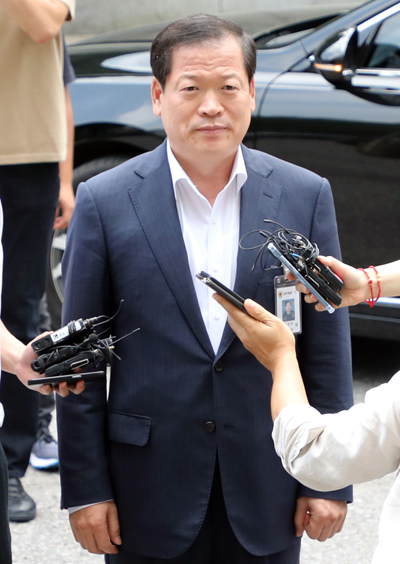 So Kang-won, the Defense Security Command’s chief of staff, appears at the Defense Ministry’s headquarters on Thursday for questioning. [YONHAP]

President Moon Jae-in vowed on Thursday to get to the bottom of a contingency plan by the military last year to impose martial law in case the Constitutional Court ruled against Park Geun-hye’s impeachment and said the most important task was to find “every bit of truth” about the plan.

“The essence of the issue at hand is to lay bare the truth about the martial law documents,” Moon said in a statement read by Kim Eui-kyeom, the Blue House spokesman, at a briefing. “We need to find out every bit of truth over why such documents were drawn up and to what extent the military was willing to carry it out.”

Moon added that those involved in the planning would not be spared punishment and must be held accountable. He emphasized that the “essence” of the matter was why the documents were drawn up and who was behind the scheme, calling controversy over statements made by his defense minister a distraction.

At a National Assembly hearing on Tuesday, there was an unprecedented display of discord between officials of the Defense Security Command, which drafted the martial law plan, and Song Young-moo, the defense minister, about how the martial law plans finally came to light.

Contradicting accounts were given, generating embarrassment for a military known for its obedience to the chain of command. At the hearing, Lee Suk-koo, head of the Defense Security Command, told lawmakers that he had briefed Song about the martial law plan “for 20 minutes,” fully aware of the seriousness of the issue, on March 16.

Song rebutted Lee’s account, saying he was briefed for about five minutes on other matters, not the martial law plan, and told Lee to leave two sets of documents - a nine-page report and 67-page plan - behind so that he could read them later since his schedule was tight that day.

The contradictions between the two fueled speculation that the Defense Security Command was trying to tarnish Song’s reputation, since the minister is a strong advocate of reforming the command, which was accused of drafting the plan and also monitoring relatives of victims of the Sewol ferry sinking on April 16 in 2014, which killed over 300 people.

While it remains to be seen who was telling the truth, damage to Song’s credibility as the defense chief has already been done with questions about his leadership of the military.

Song, who hails from the Navy, was criticized for keeping the martial law plan from the Blue House for more than 100 days after he learned about it on March 16.

Moon, who protested military governments in his university days, said he would take “appropriate action” against Song after he deliberates on his handling of the case, including why the documents were withheld from the Blue House.

Asked if Moon might fire Song, Kim said the president would decide “after reviewing the degree of his faults.”

A joint civilian-military investigative team is speeding up its probe of the case, calling in Defense Security Command officials for questioning and banning Han Min-koo, the former defense minister suspected of ordering the martial law plan, from leaving the country. The team questioned So Kang-won, the command’s chief of staff, on Thursday.

Earlier on Tuesday, So, a two-star general, testified before lawmakers that Han had ordered him to prepare a marital law plan, which included arresting opposition politicians for “anti-state” activities. Around 15 Defense Security Command officials participated in producing the nine-page and 67-page documents, So said.

The investigative team raided the headquarters of the Defense Security Command and homes of officials believed to have been involved in the planning on Wednesday. The offices and homes of those suspected of having monitored relatives of victims of the Sewol ferry sinking were also raided.

The focus of the probe is on who ordered the drafting of the martial law plan days before the Constitutional Court’s ruling on Park’s impeachment since it is unlikely that Han acted alone without consulting the Blue House.

The probe could reach as far as the former president, who is appealing a 24-year prison sentence for corruption and abuse of power.

The investigative team will likely call Kim Kwan-jin, Park’s national security adviser, in for questioning in the coming days.