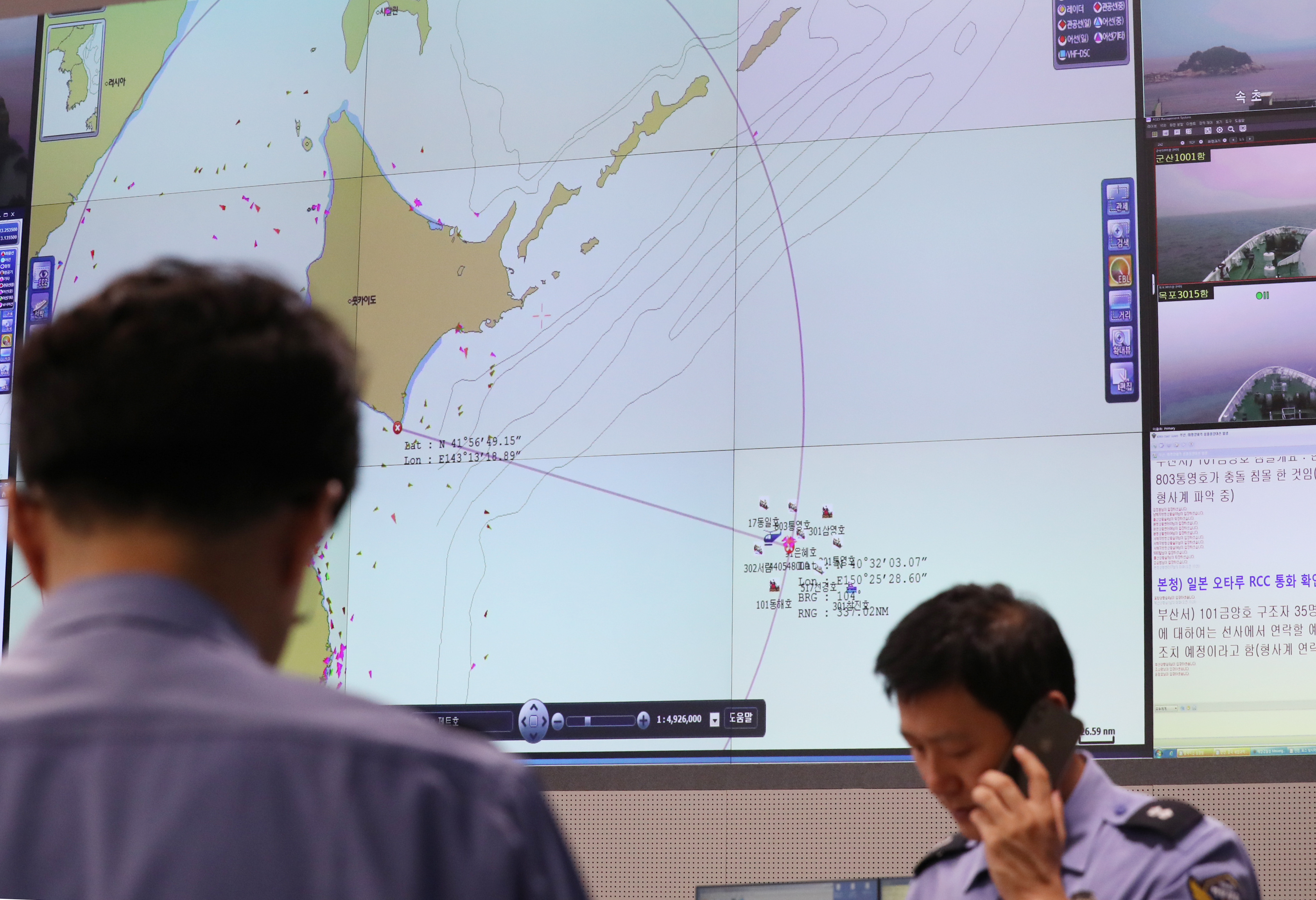 Officials at the Coast Guard’s situation room at the Sejong government complex respond to a collision between two Korean fishing vessels off the southern coast of Japan’s Hokkaido, which left three sailors missing. [YONHAP]

Two Korean deep-sea fishing boats collided in waters off the coast of Hokkaido in northern Japan on Thursday morning, leading one to capsize.

Of the 38 sailors onboard both vessels, 35 have been rescued and three remain missing.

The incident occurred at around 6 a.m. about 400 miles southeast of Hokkaido, according to Korean authorities. The 289-ton 101 Geumyang was heading into Russian waters when it crashed into the 411-ton 803 Tongyeong, which was on standby.

At 6:17 a.m., the Korean Coast Guard detected that the 101 Geumyang was capsizing through a distress signal. Two nearby ships, the 803 Tongyeongho and 91 Eunhye, immediately came to the rescue.

According to Korea’s Ministry of Foreign Affairs, seven of the 38 sailors are Korean. The three missing sailors are Indonesian, Japanese officials said. The Japanese Coast Guard has deployed a patrol ship and aircraft in the search efforts. Nine Korean fishing vessels are also participating. Kyodo News reported that heavy fog around the accident location was hampering the search and rescue operations.

The Korean Foreign Ministry said it formed a situation room at its consulate in Hokkaido and is working with the Ministry of Oceans and Fisheries and Korean Coast Guard in the search and rescue efforts. They are cooperating with Japanese authorities and have requested assistance from vessels that had been operating near the collision. A Coast Guard situation room at the government complex in Sejong is also monitoring the accident.

The Hokkaido consulate plans to send officials to support Korean victims, including in their hospital treatment and safe return to Korea.

“We plan to continue to work with related agencies for the search and rescue efforts of the three foreign nationals who have yet to be rescued,” the Korean Ministry of Foreign Affairs said in a statement.

Authorities have yet to determine the exact cause of the collision.