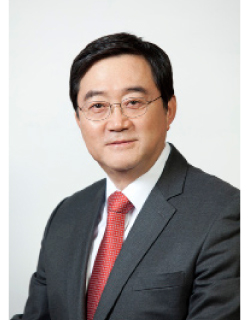 Koo Sung-hoon, the chief executive of Samsung Securities, resigned on Friday over a so-called fat-finger error where an employee mistakenly distributed 2.8 billion “ghost” shares in April when the company only had 89 million.

The resignation came a day after the country’s top financial regulator ordered Koo to suspend his duties for three months. To fill the leadership vacuum, Jang Seok-hoon, a vice chairman, will serve as acting president.

Although the regulator, the Financial Services Commission, refrained from asking for the resignation, chief executives in Korea’s financial industry typically step down after a company is penalized.

The commission confirmed its punishment for Samsung Securities’ fat-finger error on Thursday. The brokerage is banned from accepting new clients for six months, but other than that, business can operate as usual. Three former heads, including Yoon Yong-am and Kim Suk, are barred from working as executives at other financial institutions for five years.

The penalties on the incumbent and former executives indicate that the regulator sees the blunder as a lack of control at an institutional level.

An employee was supposed to transfer 1,000 won to each employee as a dividend payment. But in error, the employee gave each employee 1,000 shares of Samsung Securities.

In its preliminary investigation in May, the Financial Supervisory Service, the commission’s enforcer, accused Samsung Securities of failing to install preventative measures against such errors.

The watchdog also said that Samsung Securities did not follow the conventional stock issuance process in which brokerages are required to first report the stock to the Korea Securities Depository, a state-run organization that manages financial information related to securities transactions.

Financial authorities also held those attempting to take advantage of the mistake accountable.

The watchdog reported 21 of the employees to the prosecutors’ office. It determined that the 22nd employee made the sale purely out of curiosity.

Earlier this month, prosecutors indicted eight of the employees and arrested three others for colluding in the sale.