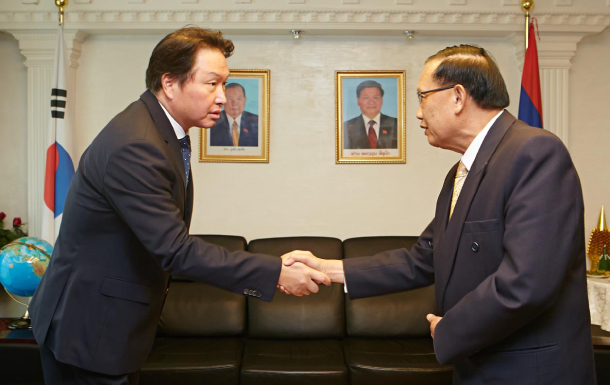 SK Group Chairman Chey Tae-won, left, meets with Khamsouay Keodalavong, Laos ambassador to Korea, on Friday at the Laos embassy in central Seoul to express his condolences over the flood crisis in Laos. [SK GROUP]

SK Group donated $10 million to an area in Laos where a dam it was building partially collapsed this week, killing at least 26 and washing away several villages.

As of Thursday, nearly 7,000 people have lost their homes with 131 missing according to local reports.

SK Group Chairman Chey Tae-won met with Laos Ambassador to Korea Khamsouay Keodalavong on Friday at the embassy in Hannam-dong, central Seoul, to express his condolences.

Chey vowed that the company will carry out an all-out rescue effort in the affected area.

“No words will be able to comfort the Laos people who lost relatives and a place to live due to the latest crisis,” said Chey in a written statement. “We will try our best to help Laos residents return to their daily lives and heal their broken hearts,” the chairman added.

SK Group sent some manpower to Laos after the accident. SK Engineering & Construction (SK E&C) formed an emergency committee to respond and has been dispatching relief goods such as helicopters, boats and medical kits there.

It sent 30 staffers to Laos to help a local rescue team of about 100 people and SK Holdings, the biggest shareholder of SK E&C, also sent a team of 30 staffers to the site on Thursday morning.

“We appreciate the support sent by the Korean government as well as the SK Group on behalf of the Laos people, who have been suffering for four to five days due to flood,” Keodalavong said.

SK Group said Friday that it will also send 50 tons of relief goods to Laos.