After her husband’s suicide, they became her rock

After her husband’s suicide, they became her rock 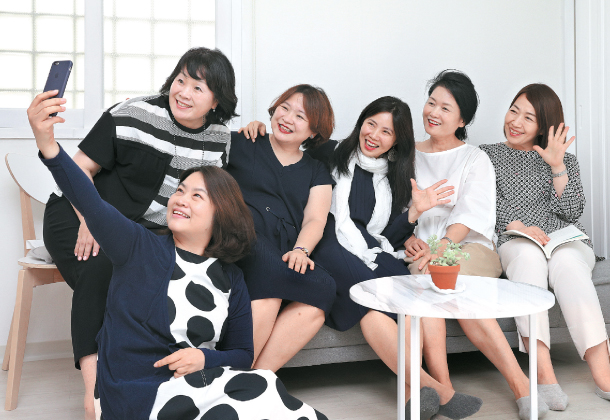 Kim Hye-jung, second from right, who lost her husband to suicide, and members of her support group take a selfie at an office in Mapo District, western Seoul, on July 3. [LIM HYUN-DONG]

For the past 13 years, Korea has held the unenviable distinction of having the highest suicide rate among the 36 member countries of the Organization for Economic Cooperation and Development (OECD).

In 2016, around 25 per 100,000 Koreans committed suicide, more than twice the OECD average of 10 to 12 people. Every day, an average of 36 people kill themselves in Korea. For every person who commits suicide, five to 10 people closest to them, often called the suicide bereaved, are directly impacted.

Over the past decade, about 700,000 people have been impacted by a loved one’s suicide. What’s worse, the friends and family left behind are also in danger of harming themselves. According to research by Seoul National University Hospital, 43.1 percent of those loved ones have seriously considered committing suicide themselves.

Other research suggests that the suicide bereaved have a higher risk — up to 4.5 times — of committing suicide.

Kim Hye-jung is a member of the Korea Association for Suicide Prevention. Nine years ago, Kim’s husband committed suicide, and she relied on friends and neighbors to help her through that tough period.

On June 29, six middle-aged women gathered at a restaurant in Mapo District, western Seoul, for dinner. The affectionate way they hugged each other and held each other’s hands showed how close they were.

They were the parents and teachers whom Kim met at her two sons’ day care center when she lived in Gwacheon, Gyeonggi.

The women had been by her side since before 2009 when Kim’s husband took his own life. Even after Kim moved to Seoul, they still travel back and forth to talk to each other.

“There was a World Cup happening around then, too,” observed one of the mothers.

“Our kids would get so excited playing football,” another said. “That one kid would play every recess. He could have become the next Park Ji-sung!”

The group of chattering ladies reminisced about the old days as they often did and talked excitedly about their children. The subject of conversation eventually turned to neighbors who couldn’t make it. “They’ve always been there for me,” Kim said, “and helped me through a painful period. I’m so thankful that I have them in my life.”

Kim still remembers everything her neighbors did for her after she unexpectedly lost her husband. “At the funeral service, they told me they would always be there for me, that we should live among each other even though life might be hard,” she said.

“When I returned home after the burial, I was so shaken that I was just holding my two sons. I will never forget how my neighbors made food and played music for me and made sure that I didn’t go to sleep alone that night.

“It was they who pulled me out of the house when I was about to become a hermit. It was they who came to hug me when the grief became so much that I would just stop in my tracks in the middle of the street.”

That Kim can still seem them regularly provides her with comfort. “They treat me with the same warmth that they did back then,” she said, “and I’m so grateful for it.”

The neighbors admit that they didn’t know how to best handle the situation at first. Kim Mi-ae, a family friend, said she went on an overseas trip with Kim and her husband a while before the tragedy and still regrets not seeing the warning signs. “It was a shock for all of us,” she said. “We didn’t know exactly how to be there for the bereaved family, but we all knew that we had to.”

“At first, I tried to distance myself a bit in case my presence was uncomfortable to them,” Park Young-hye said. “I think you need some time before the people who are hurt are comfortable with your help. It’s important to open yourselves up to each other.”

But Kim wants her neighbors to know that they shouldn’t feel guilty for missing the warning signs.

“One of my husband’s friends still feels bad that he didn’t notice what was going on when he had lunch with my husband a few days before it happened,” she said. “My husband and I would like to tell everyone that they don’t need to feel guilty, that it’s not their fault.”

On July 3, the women met up again to read a book by Nam Jung-ha, one of their friends, titled “Angry Mom, Nervous Child.” This group is really what keeps Kim going.

“This group was made for me, so I feel thankful for the attention and care,” she said. “It was probably awkward for them at first, trying to become closer to someone who was so hurt. But we communicated with each other, and there was no prejudice left after that.”

There are 37 support groups around the country for the suicide bereaved that are run by mental health awareness and suicide prevention centers. People who have lost their family to suicide meet regularly to share their grief and help each other heal.

For Kim, the six women are her own support group. The only difference is that her friends have not lost their friends or family to suicide.
The first in the group to learn about what happened to Kim was Nam.

“It must have been hard for her to go against social norms and open up about her husband’s suicide,” Nam said. “When I first found out, I wanted to sympathize, but it was hard to publicly show that I knew or to approach the issue in any other way. Now, our bond has grown stronger.”

Ko Yeon-sun shares her experience as well. “I thought long and hard about what to do after I learned of the pain hidden behind her bright smiles,” Ko said. “I decided that I couldn’t leave her alone in that bottomless pit of emotions. I pledged to become a friend she could just hang out with and have fun without it being awkward.”

“I’m really glad that [Kim] told us about her experience,” said Lee Hyun-joo. “It’s nothing to be ashamed of. I get an opportunity to look back on myself as I comfort her and help her through.”

Kim says that other people who have been hurt by suicide deserve the same kind of support. “It’s really important to mourn properly. Burying your sorrow will only lead to more problems.

“You’d be surprised how much warm support and help you can get just by reaching out to support groups. If you expand your relationships and get a good support system that will be your rock, you will feel the same peace and happiness that you felt with the person you lost. It would be great if the government did more to provide a one-stop support system for the suicide bereaved and spread suicide prevention education through various institutions.”