Giving rice to the hungry by losing weight

Giving rice to the hungry by losing weight 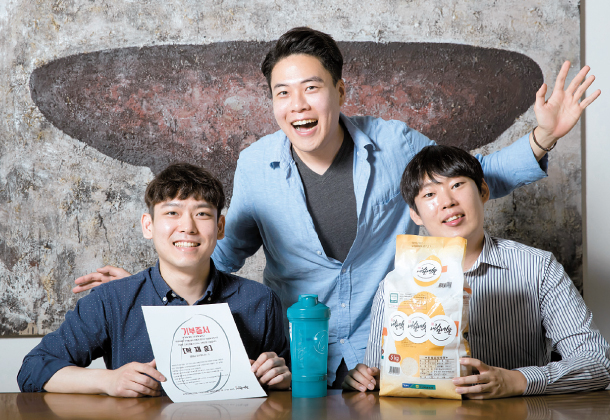 From left, Lee Joon-hyuk, Lee Geun-young and Jo Young-jae started Naesal Nessal, a social venture that combines dieting with donations, after they watched a documentary about malnourished children in Korea. [CHOI JEONG-DONG]

Naesal Nessal, my fat is your rice. That’s the name of a social venture run by three friends. The concept is novel. It combines dieting with donations.

Participates give Naesal Nessal a certain amount of rice that corresponds with the amount of weight they want to lose in kilograms. After 22 days, those who reach their goal get their rice back and have the option of donating out of their own pocket. Those who fail are not reimbursed.

Naesal Nessal started as a bet among three friends — Jo Young-jae, Lee Geun-young and Lee Joon-hyuk — after they watched a documentary about malnourished children in Korea.

“It was ironic to see kids having to make do with one rice ball for an entire meal when I know plenty of people, including myself, who leave food and skip meals because they’re on a diet,” Lee Geun-young said.

After finishing the documentary, they decided to pursue a dieting challenge. The two people who lost the least weight in a month had to donate rice under all three of their names. In the end, they donated 30 kilograms of rice to a social welfare center in Seoul.

And thus, Naesal Nessal was born. Most of the project lives on Instagram. The trio posted pictures promoting the venture, and people who want to participate upload their progress on Instagram.

In June 2017, the three friends made 50 bracelets with the company’s logo and sold them all on social media. With the profit, they donated 200 kilograms of rice.

In the beginning of this year, Naesal Nessal was incorporated. Since then, they have raised 5.5 million won ($5,000) through crowdfunding and used the money to make and sell shake bottles with an image of rice printed on them.

With that profit, they donated 600 kilograms of rice to World Vision, a disaster relief organization.

In total, Naesal Nessal has given away 1,600 kilograms of rice, and the three friends not done just yet. They also plan to sell weight loss trays and necklaces for charity, and connect university clubs and companies to child welfare facilities.

“I’m so happy that we did what we thought was meaningful and it actually brought great results,” Lee Geun-young said. “We want to continue being a bridge for those who give to charity and those who receive it.”