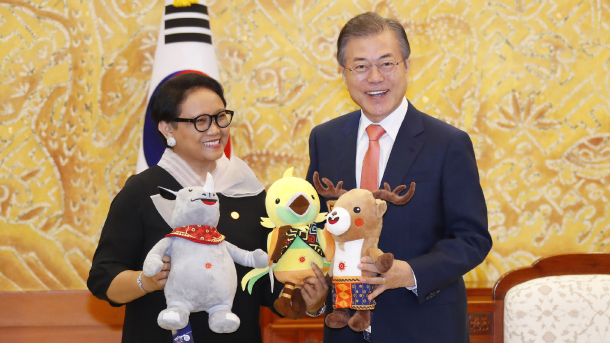 President Moon Jae-in met with a special envoy of Indonesian President Joko Widodo, who is seeking to host the leaders of both Koreas at the upcoming Asian Games, on Friday.

In a meeting at the Blue House, Retno Marsudi, Indonesia’s foreign minister, delivered a personal invitation from the Indonesian president for Moon to visit his country during the Asian Games, which begins on Aug. 18.

“The reason I came here today is to deliver an official invitation to the Asian Games, which is set to be held in Jakarta,” the Indonesian foreign minister said through her interpreter, while handing a written invitation to the South Korean president.

Marsudi arrived in Seoul on Thursday.

In an earlier meeting with the South Korean foreign minister, Kang Kyung-wha, Marsudi insisted the quadrennial sporting event could also be a special occasion for the two Koreas since the countries have agreed to field joint teams in at least three events, including women’s basketball.

According to pool reports, Moon expressed hope for the Asian Games’ success without offering any direct response to the invitation.

“I offer my gratitude for allowing South Korea and North Korea to jointly march at the Jakarta-Palembang Asian Games and to form unified teams in certain events,” Moon told the visiting Indonesian official, according to pool reports. “I wish for the success of the Jakarta-Palembang Asian Games, and I hope it will be a great opportunity to further promote cooperation between not only South and North Korea but all nations in Asia.”

If Moon visits Indonesia for the Asian Games, it will be his second trip to the Southeast Asian country. In November, he made a three-day state visit to Jakarta, the country’s capital.