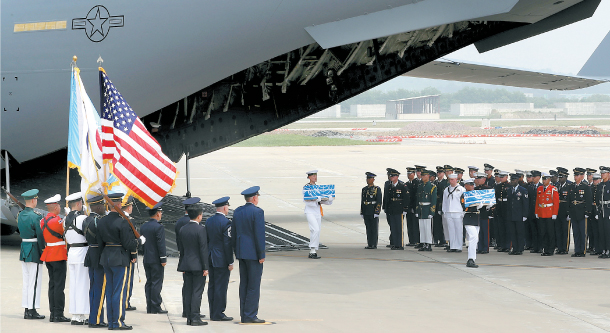 A UN honor guard carries boxes containing remains of American soldiers killed in the 1950-53 Korean War at Osan Air Base in Pyeongtaek, Gyeonggi, on Friday. The United Nations Command said 55 cases of remains will be honored at a ceremony next Wednesday at the same base. [YONHAP]

A U.S. military cargo plane flew into North Korea Friday morning to pick up 55 cases with remains of American soldiers killed in the 1950-53 Korean War and returned to South Korea’s Osan Air Base in Pyeongtaek, Gyeonggi, south of Seoul, hours later.

In the joint statement signed by the leaders on June 12 in Singapore, the United States and North Korea agreed to commit to recover remains of prisoners of war (POW) and soldiers missing in action (MIA), including the immediate repatriation of those already identified.

The return of American remains from North Korea, the first since 2007, coincided with the 65th anniversary of the armistice that ended the Korean War.

A Boeing C-17 Globemaster III from the U.S. Air Force departed Osan Air Base at around 5:55 a.m. for Wonsan in Kangwon Province, just north of the inter-Korean border facing the East Sea, to bring back the remains, returning to Osan at around 11 a.m.

The aircraft was accompanied by service members from the United Nations Command Korea and technical experts from the U.S. Defense POW/MIA Accounting Agency, according to a statement from the White House.

It is not clear how many soldiers the remains represent. From 1990 to 2005, the North returned 437 caskets of remains, of which 334 people were identified by the U.S. Defense POW/MIA Accounting Agency.

The United Nations Command (UNC) said in a press release that the UNC and U.S. Forces Korea Commander Gen. Vincent K. Brooks was expected to host a full honors ceremony next Wednesday at Osan Air Base. Immediately following that ceremony, the remains will be flown to Hawaii for further processing under the U.S. Defense POW/MIA Accounting Agency, where technical experts will try to make matches on them.

“It was a successful mission following extensive coordination,” said Brooks. “Now, we will prepare to honor our fallen before they continue on their journey home.”

Shortly before the cargo plane left the North with the remains, Trump expressed gratitude to Kim tweeting: “The Remains of American Servicemen will soon be leaving North Korea and heading to the United States! After so many years, this will be a great moment for so many families. Thank you to Kim Jong Un.”

The Office of the Press Secretary in the White House said in a statement that Washington was “encouraged by North Korea’s actions and the momentum for positive change.

“Today’s actions represent a significant first step to recommence the repatriation of remains from North Korea,” said the White House, “and to resume field operations in North Korea to search for the estimated 5,300 Americans who have not yet returned home.”

North Korean media made no mention of the repatriation as of press time Friday.

South Korea’s Ministry of Foreign Affairs said in a statement that it “strongly welcomed” North Korea’s “humanitarian” gesture of returning the remains, adding that it was a “significant step forward” in building trust between the United States and North Korea. The ministry continued it would also cooperate with the North to return the remains of South Korean soldiers killed in the Korean War.

Pyongyang’s return of the remains came as dialogue between North Korea and the United States fell into gridlock as the country has refused to comply with complete denuclearization and instead has been pressing Seoul and Washington to declare a formal end to the Korean War, which it sees as a security guarantee.