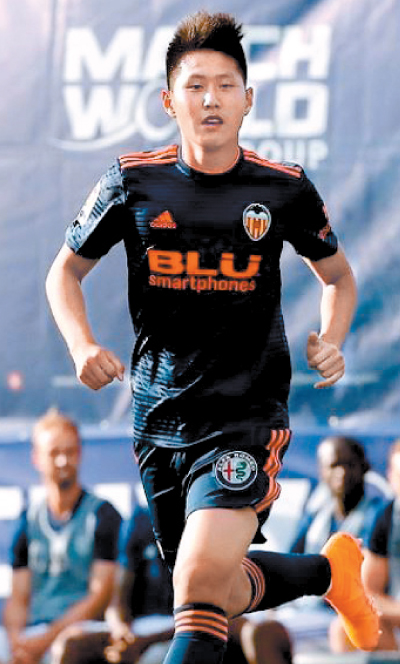 Signing the new contract wasn’t the only exciting development in the young pro’s career — his buyout clause, a good measure of a player’s value to a club, has jumped from 8 million euros ($9.4 million) to an astonishing 80 million euros.

“Valencia CF has reached an agreement with Kangin Lee on Saturday to extend his contract until June 30, 2022, with a termination clause of 80 million euros,” the club announced on its website on July 21. “The young Korean footballer will play this season as a base player but is already working with the first team, which is expected to join all the effects next season.”

The 17-year old joined the first team’s training camp on Monday and was promptly called up to make his first team debut on July 25 during a pre-season friendly against Swiss side FC Lausanne-Sport.

A buyout clause allows other clubs trying to sign a player to skip negotiations over a transfer fee if they are willing to pay the set amount, 80 million euros in Lee’s case. Player transfers typically require teams to negotiate a transfer fee, but teams can bypass this process and go straight to contract negotiations with the player if they are willing to cough up the buyout figure.

Placing such a high buyout clause on Lee, who at the time had not played in a single first team match, is significant. The midfielder’s buyout clause is the second highest among Valencia’s U-19 players, behind Ferran Torres, who was promoted to the first team last season.

In February there were reports that Lee may naturalize as a Spanish citizen. A local Valencia newspaper reported that the Royal Spanish Football Association had been pushing for the naturalization of Lee for three years. He met the requirement for naturalization on June 30 after having lived in Spain for seven years.

In response, the Korean Football association said that Korea’s under-19 national team manager contacted Lee’s father who denied reports that the Valencia player intended to naturalize.

Lee made his first public appearance in season three of the KBS TV program “Shooting Kid” in 2007. The gifted youngster was only seven at the time and was labeled a football prodigy.

Hailing from the port city of Incheon, Lee entered the youth academy at Incheon United before moving to Spain in 2011 with his family. He was admitted to Valencia’s youth academy.

Lee has been moving up the ranks at Valencia very quickly. Last July Lee was promoted to the Juvenile A team and then in January he was offered a professional contract and promoted to the Valencia B team.

During the 2017-18 season, the 17-year old attacking-midfielder played 11 matches in Spain’s Segunda Division B league and scored one goal.

His development at the Valencia CF youth academy is reminiscent of two other young Korean stars — Paik Seung-ho and Lee Seung-woo. Paik and Lee Seung-woo both rose through the ranks of FC Barcelona’s youth system and have begun to carve out careers in European football.

Paik left Barcelona’s second team last August and signed with the then-newly-promoted Spanish side Girona FC, playing for its second team CF Peralada in the third tier of Spanish football.

Lee Seung-woo, who made his international debut for the Korean national team this summer in the 2018 Russia World Cup, also left FC Barcelona B for 1.5 million euros last August and joined Series A’s Hellas Verona. In the 2017-2018 season, Lee Seung-woo played in 14 matches and scored one goal against AC Milan.

Like Lee Seung-woo and Paik, the Valencia prospect’s quick promotions and potential have reportedly caught the eye of both Real Madrid and Manchester City, even though his club has been trying to shield him from potential suitors.

At the beginning of last year Valencia renewed Lee’s contract until June of 2019. His market value soared after playing in the Toulon Cup last May for Korea’s under-19 national team as he managed to hold his own against players four years older than him.

In three appearances during the Toulon Cup, the midfielder scored a free-kick and a field goal to record two goals. Many scouts from European clubs took notice, and Valencia acted quickly to protect their potential star by renewing his contract until 2022 and increasing his buyout clause.

Valencia CF’s first team manager Garcia Toral, known as Marcelino, said that Lee is a very young player who will learn from the first team. The manager continued that Lee must continue to develop and believes that he will benefit greatly from joining training sessions with the first team.

Spanish newspaper Sport reported that Valencia has a long term vision for the young prodigy and that they do not want to exhaust his potential too quickly. It continued that Lee will continue to play matches for Valencia B and that Marcelino will bring him up to play in first team matches accordingly.

At a press conference after his first team debut, Lee said, “It was my dream to debut here in Valencia with the first team and now I’m really happy to be able to play with these amazing teammates and great coach. I’m very happy.”