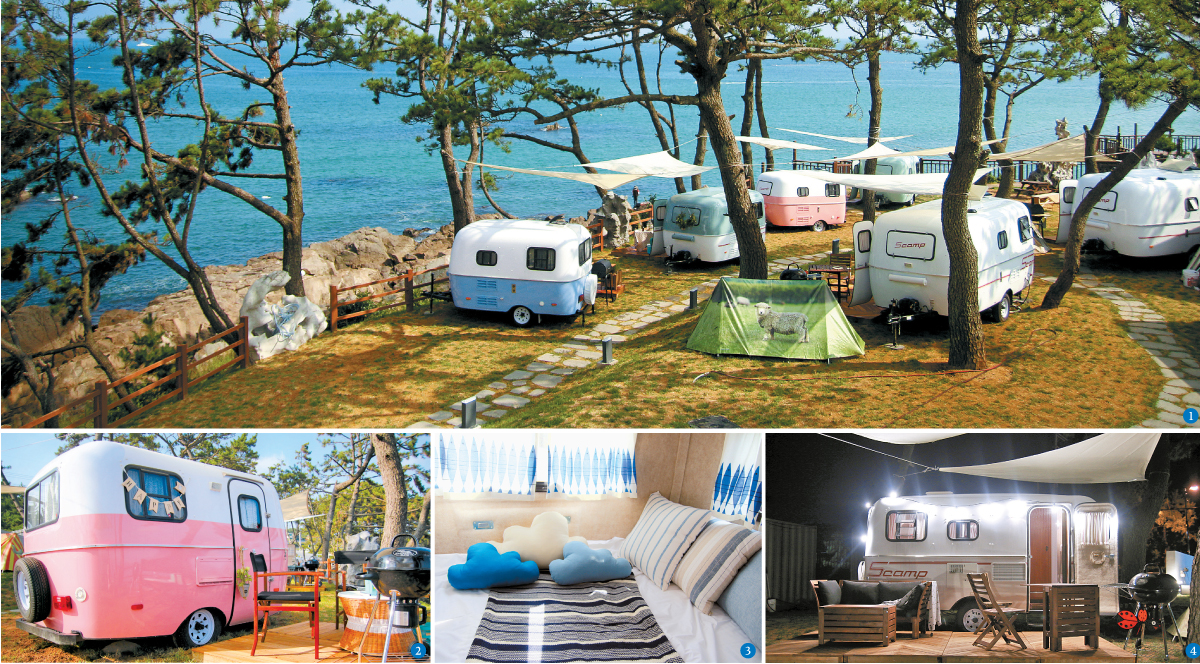 1. The Moving Caravan, located near Imrang Beach in Busan, is a popular glamping site because of its convenience and proximity to the sea. 2. Each van includes its own grill for campers to enjoy. 3. The beds inside each van offer a comfortable place to spend the night. 4. At night, each camp site is brightly lit. [THE MOVING CARAVAN]

Summer is the perfect season for families to escape the city and go camping in the woods. Despite the heat, camping remains a favorite summertime activity for many Koreans looking for a peaceful retreat and an opportunity to spend quality time with family and friends.

It hasn’t been long since camping became one of the most popular recreational activities in Korea. Camping became a popular hobby in the late 2000s, following the increase of camping services and products being made available in the country. According to Statistics Korea, the number of Korean campers hit five million in 2016 - a big leap compared to 2010 when there were merely 600,000 campers. With more and more people spending their weekends at camping sites, the industry has grown from being worth 20 billion won ($17.6 million) in 2008 to more than 1.5 trillion won in 2016, according to Statistics Korea.

While many follow the traditional method of camping in the woods with sleeping bags and tents, others prefer to go glamping (upscale camping) or visit restaurants that offer a camping atmosphere. As these individuals prioritize convenience, they are willing to pay a high price to make their outdoor experience as seamless as possible.

“Camping is [traditionally] considered to be an outdoor activity where people take care of their own needs and mingle with nature,” said Ham Chang-ho, the assistant manager of the Leisure Tourism Team at Korea Tourism Organization (KTO). “However, camping culture has [drastically] changed due to the emergence of new forms of camping, such as glamping.”

The idea of enjoying natural surroundings while sleeping in luxury accommodations may seem like a foreign idea for tent enthusiasts, but since 2010, glamping has become a popular global trend. Compared to traditional camping, where people need to prepare basic supplies, such as food and cooking utensils, the biggest merit of these luxury sites is that they offer everything - from accommodations to equipment - to their guests.

Many campers seek out locations by the sea, especially in the southern city of Busan. The Moving Caravan, a glamping site located near Imrang Beach is one location attracting crowds to camp near the seaside. Just like its name implies, the camping site uses small, compact vans to provide accommodation.

“Unlike other glamping sites, our camping site offers visitors the unique chance to take in the scenery of a sunrise and sunset inside the van,” said CEO Heo Beom-jun. “We’re busiest during the summer peak season of July and August, but we see many visitors during all four seasons. Along with our numerous facilities, the reason behind our popularity is the fact that our camping site is near the sea and thus, the scenery is breathtaking.”

“Another interesting characteristic about glamping is that the barrier to entry is lower than traditional camping, as people no longer have the need to invest in cars or tents,” said Ham, from KTO.

Left: A camping van awning provides shade for when users are outside of the car. Center: Campers are able to enjoy eating and resting inside the camping car. Right: Camping cars include heaters that can function without running the car, switches that control electricity, adapters and a small cupboard for supplies. [HAENAREUM CAMPING CAR]

One example is Nanji Hangang Park located in Mapo District, western Seoul. Visitors only need to pay 4,000 won to enter the camping ground and use the provided facilities. Those who wish to stay for a night can do so by making online reservations and paying beforehand. One advantage of the camping site is that the tents are already installed and visitors can rent the rest of the equipment they need for an additional fee.

The simplicity is especially appealing to inexperienced campers because they can try out camping not too far from home and at an affordable price compared to luxury camping sites.

“The difference between old-school camping and glamping is that traditional camping allows the camper to be creative in making an environment [that he or she finds the most suitable],” said Song Chi-man, 37, who went camping every weekend of the summer two years ago. “For example, glamping can be characterized as easy-to-build Legos with instructions, while camping is building [objects with Legos] without any guide or instruction manual. That’s what makes traditional camping attractive for classic campers.”

While glamping may be having its moment, many have taken their camping experience to the next level by converting vans into customized camping cars. More and more local campers want to kill two birds with one stone by experiencing camping but with more convenience and comfort. In Incheon, a manufacturing company called Haenareum Camping Car specializes in making custom camping cars for customers.

There is nothing quite like driving far away in one’s very own car, checking out different sights and parking wherever they want to sleep. Campers young and old have found this style of exploring nature appealing.

“We have quite a few customers in their 30s and 40s, but also those in their 60s and 70s,” said Kyoung Youn-sang, executive director at Haenareum Camping Car. “These are people from our parent’s generation - people who have spent all their time working nonstop and raising their children. I think they are looking to travel and experience things that they could not before because they have been so busy and exhausted,” said Kyoung.

Haenareum Camping Car comes up with ways to make better use of people’s cars when turning them into camping cars. From solar panels set up on the roof of the car and heaters that can function without using the car’s electricity, to sinks where people can wash their dishes and car awnings that provide shade outside of the car, camping becomes a lot more convenient with a few tweaks here and there. Although camping cars require a lot of money up front, once people have them, they can go anywhere and enjoy a relaxing getaway. According to Statistics Korea, 9,200 camping cars were registered last year, a six-fold increase from five years ago.

The most popular vehicles used for camping cars are the Hyundai Starex and the Kia Carnival. Depending on what car one is using and what equipment one is adding in, costs vary greatly. “Customers prefer to buy Starex because it is more affordable compared to other camping cars and is more spacious than similar models,” said Kyoung.

From left: Camping in the City, a restaurant at the Grand Walkerhill Seoul hotel in Gwangjin District, eastern Seoul, offers a fancy glamping experience with a menu full of barbeque options, cabanas and Indian-style tents. The Family & Together Set consists of fried vegetables, kimchi, seafood and meat. The grill and the ingredients are prepared by the hotel, and customers can freely cook their food to their tastes.[CAMPING IN THE CITY]

Going out for a meal

“Campnic,” a portmanteau of camp and picnic, is an activity loved by many. From setting up a tent and enjoying a meal at the Yeouido Han River Park, western Seoul to dining at trendy outdoor restaurants like Camping in the City at the Grand Walkerhill Seoul hotel in Gwangjin District, eastern Seoul, enjoying a meal in a camp-like setting has become a popular way to enjoy the outdoors.

Surrounded by a scenic view of Mount Acha, Camping in the City is the only campnic option available at a five-star hotel in Seoul. They offer the perfect glamping experience with barbecue options, indoor air conditioners, fancy cabanas and Indian-style tents, glamping equipment and play facilities for children. There is even a campfire for customers to enjoy in the winter.

Kim Tae-beom, the manager of Camping in the City, said, “The restaurant opened in 2011. At the time, the glamping trend had just begun, and we believed it would continue.” Kim added that “compared to the previous year, the number of customers has increased by 30 percent,” proving that the trend of glamping and campnic has yet to run its course.