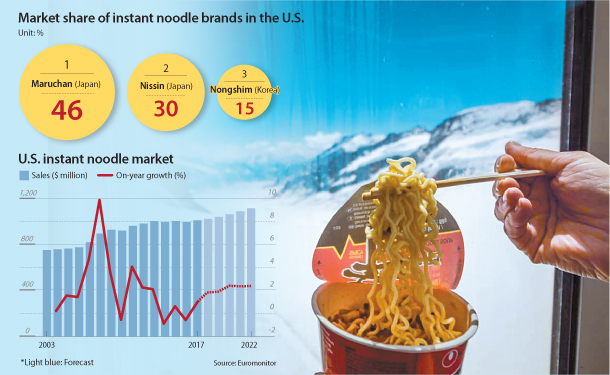 Spicy Korean instant noodles are proving to be a success overseas.

While Japanese ramen noodles were the first to be exported to the U.S. market, Korean brands are quickly settling in as well, with Nongshim’s Shin Ramyun at the forefront.

Korean ramyeon can easily be seen alongside instant noodles from Japan, China and Southeast Asian countries in supermarkets around the United States. 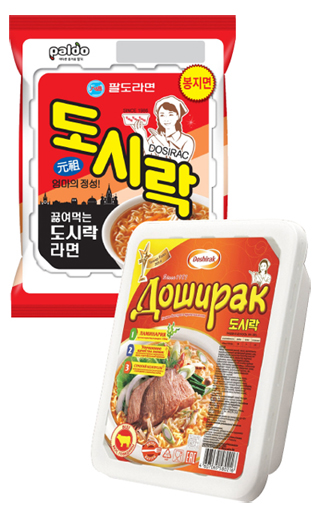 Maruchan, a Japanese company, is the biggest instant noodle company in the United States, with a 46 percent market share. Nissin, another Japanese brand, came in second with 30 percent. Korea’s top noodle maker, Nongshim, ranked in third with 15 percent of the market.

Nongshim’s U.S. market share was only 2 percent just 10 years ago. Sales have been growing exponentially each year and are catching up to the leading Japanese brands at a brisk pace.

“We are developing products separately from those made in Korea to appeal to local tastes,” said Jang Woo-jin, a director at Nongshim America.

The factory produces 16 kinds of instant noodles, six of which are not sold in Korea. Over 300 million packs of ramyeon made at the factory are sold in North America each year.

Although Korean instant noodles entered the global market relatively late in the game, Nongshim says its recent success can be attributed to superior quality.

“From the beginning, Japanese ramen companies like Nissin and Maruchan targeted low-income consumers, so their products contained nothing but noodles and seasoning,” said Krith Roth, the head of Nongshim’s North American sales division. “Nongshim, on the other hand, makes its noodles out of high-quality flour and includes dried vegetables with the seasoning.”

“We are constantly developing various flavors through our research and development team at our LA plant,” said Shin Dong-yeop, president of Nongshim America. “Young Americans are becoming more accustomed to spicy food, and 60 percent of Nongshim America’s consumers are of non-Asian descent.”

Major executives and staff members of research and development labs cook, taste and discuss new flavors using noodles and soup made from different ingredients every day.

Their efforts to localize bore fruit when Nongshim’s best-selling Shin Ramyeon became the first Korean food product to be stocked in all U.S. Walmarts.

Some are Koreans enjoying the noodle with their foreign friends, but about half of the videos are foreigners challenging their tolerance for heat. Thanks to the trend, 45 percent of Samyang’s 450 billion won in current annual sales is from exports.

“Eighty-five percent of our exports are from the Hot Chicken Flavor Ramen line,” said Jin Jong-ki, planning division director at Samyang Foods. “We were surprised that so many foreigners are enjoying the product, which even Korean consumers found very spicy.”

Paldo Doshirak is notable, as it grew to become Russia’s dominant instant noodle product since its launch in 1986. In response to its overwhelming popularity, Paldo established a Russian subsidiary in 2002 and has produced eight kinds of products at two production plants.

“Doshirak was first introduced to Russia through sailors and peddlers who traveled between the ports of Busan and Russia,” said Cho Hong-cheol, the head of the international business team at Paldo. “The key to our success in the Russian market was our establishment of a factory in Russia and continuing efforts to localize products that suit local tastes, like chicken, mushrooms and shrimp-flavored noodles.”