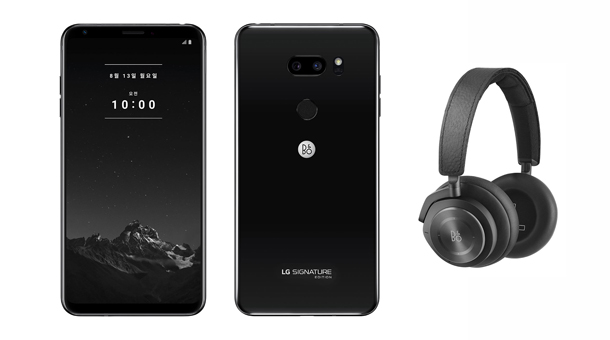 The smartphone under the Signature brand name - a second edition after an earlier model released last December - will be available for preorder for two weeks starting today and begin offline sales in Korea on Aug. 13. It will carry a price tag of 1,999,800 won and only 300 units will be available. Signature is LG’s brand of top-notch home appliances including refrigerators and washing machines.

The pricey phone, based on the form factor of their V35 flagship smartphone, is wrapped in Zirconium Ceramic, a special material that cannot be scratched. The highly sophisticated material is difficult to manufacture and is typically used for luxury watches. The device, with 256 gigabytes of storage and 6 gigabytes RAM, runs on the Android Oreo operating system.

“We will provide extraordinary value not only in terms of functions but also design and after-sales services,” said Choi Sang-gyu, head of domestic sales at LG Electronics.

Prospective users will have to buy the phone first - either online or at offline stores run by LG - and then find a mobile operator to subscribe to, as the device won’t sell directly through any of Korea’s three carriers.

Customers can have their name engraved on the back of the device or on a leather case. Beoplay H9i wireless over-ear headphones, worth as much as 700,000 won, come with the phone.

The first generation sold out at the end of last year and LG says it found potential in the hyper-premium market.