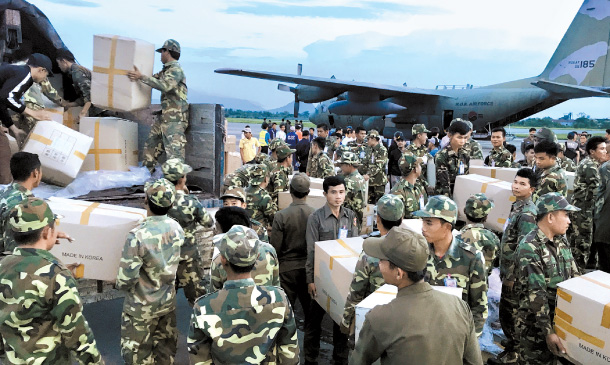 Laotian soldiers and officials move boxes of provisions provided by the Korean government for flood relief after the shipment arrived in Laos on Saturday. The Korean government on Sunday also dispatched two teams of doctors and aid workers to Laos to support rescue efforts. [YONHAP]

The Korean government dispatched two teams of doctors and aid workers to Laos on Sunday to support rescue efforts after a dam breach last week left dozens dead and thousands without a home.

The two teams consist of 15 doctors and five volunteers. They will be staying in the affected region, the southern province of Attapeu, for 10 days to treat patients and prevent possible infections.

“There are many Laotians waiting for rescue,” Kang Jeong-sik, deputy minister for multilateral and global affairs at Korea’s Ministry of Foreign Affairs, told the doctors gathered at Seoul Air Base. “This accident took place at a dam project in Laos which a Korean company was part of. Not only are the eyes of the locals in Laos on you, the citizens of Korea are also interested in our rescue efforts.”

On the night of July 23, the Xe-Pian Xe-Namnoy hydropower dam, which is being built by four companies including two Korean ones, SK Engineering & Construction and Korea Western Power, broke. As much as 0.5 billion cubic meters (17.6 billion cubic feet) of water swept through nearby villages, according to Lao News Agency, the state media outlet.

As of Wednesday, there were 27 people killed by the flood, 131 missing and about 6,000 displaced, according to Lao News Agency and the Laos government. The United Nations put the number of villages affected by the accident at eight last week.

On Friday, SK Group Chairman Chey Tae-won visited the Laos Embassy in Seoul to convey his condolences and $10 million to be used for emergency relief in Laos.

“For Laotians who have lost their homes in this disaster, I am not sure what words will be able to offer them condolences,” Chey told Laotian Ambassador Khamsouay Keodalavong. “We will try our best to help them recuperate.”

In reply, Keodalavong said, “We are thankful to the Korean government and SK’s support.”

SK Engineering & Construction said on Sunday that it has dispatched about 200 employees to Attapeu to assist with disaster relief efforts, including building temporary homes for about 150 households. The company also dispatched 50 tons of emergency aid kits including medicine, 50 tons of food and 20 tons of clothing to the area.

There have been reports that the Korean builders of the dam may have known that the dam was going to break but did not warn the locals in time.

In a report to the National Assembly on Wednesday, Korea Western Power said the water level in one of the subsidiary dams to the main hydropower dam dropped 11 centimeters (4.3 inches) on July 20, a sign of a possible fracture.

The company then noticed dropping water levels in about 10 different locations in the upper area of the dam on July 22. When the water level dropped by 3.2 feet on the morning of July 23, the consortium in charge of the project requested the Laos government’s assistance in evacuating villagers in the area, according to Korea Western Power’s report.

Critics say the engineers should have alerted the government earlier so that evacuations could have started sooner. Ian Baird, a geography professor at the University of Wisconsin in the United States, who specializes in Laos, told The New York Times last week that the companies involved are “trying to play this out as a natural disaster that wasn’t their fault. I don’t believe that for a second.”