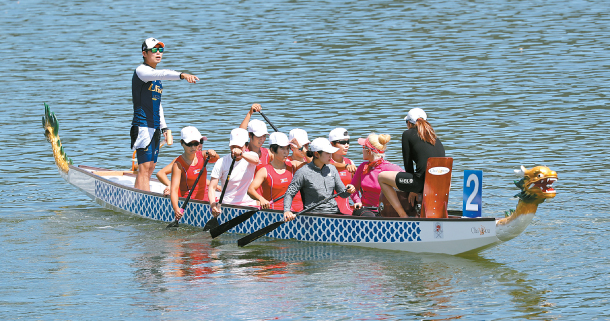 Athletes from South and North Korea kicked off three weeks of training in the South on Monday to learn how to work on joint teams at next month’s Asian Games (Asiad) in Indonesia.

The Koreas will compete in unified teams in three sports - dragon boat racing, rowing and women’s basketball - across six separate events at the Asian Games in Jakarta and Palembang, Indonesia, which will be held from Aug. 18 to Sept. 2.

This is the latest international sporting event for which the Koreas have fielded unified teams this year, after fielding a combined women’s ice hockey team at the Pyeongchang Winter Olympic Games in February and a joint women’s double team at the World Table Tennis Championship in May. A joint declaration by South Korean President Moon Jae-in and North Korean leader Kim Jong-un at the April 27 inter-Korean summit included a pledge to participate jointly in the upcoming Asiad.

Sports officials from the Koreas at the end of June officially announced the combined teams for the three sports. They also decided that a joint delegation of 200 athletes - 100 from each side - will march together under a unified Korea flag at the opening ceremony of the games. The traditional song “Arirang” will serve as the anthem for the unified teams.

The North’s competitors for the two water sports events joined their southern counterparts at Chungju, North Chungcheong, on Monday, where training kicked off on Tangeum Lake.

Six athletes from the South and six from the North will make up the dragon boat team for both the men’s and women’s competitions.

Dragon boat racing was first introduced as a medal sport at the Asian Games in 2010. A dragon boat is crewed by 12 people - 10 paddlers, a drummer and a sweep. The drummer, who sits facing the paddlers at the bow, synchronizes their strokes through a rhythmic drum beat while the sweep steers the boat with a central oar at its rear.

The fact that dragon boating is not a big sport in either Korea allowed a swift assembly of a unified Korean team without coming at the expense of any South Korean athlete, officials of the South’s Korean Canoe Federation said.

The unified rowing teams were also spotted training alongside the dragon boat racers on Tangeum Lake. For rowing, the Koreas are set to compete as one in the lightweight men’s four, lightweight men’s eight and lightweight women’s double sculls events.

A challenge, however, lies in the lack of time for training. Given the tight coordination required by the two water sports, athletes from the two sides will need to devote much of the three weeks until the Asiad begins to improve their teamwork.

“We all have high expectations,” said Cho Hyun-sik, the joint team’s support director. “The downside is that the training period is short, but we hope to maximize our synergy.”

For the joint women’s basketball team, prospects look brighter. South Korea is currently the defending champion for the sport, having won gold in Incheon in 2014.

The South’s players visited Pyongyang early this month for a series of friendly matches, where officials coordinated on how to compose a joint team for the games.

Combined training for the unified basketball team is set to begin on Wednesday after the South Korean players return from competing in the William Jones Cup in Taiwan on Monday. According to comments made by the South’s team captain Lim Young-hee at a media event earlier this month, the team will need some time to facilitate their communication on the court.

Specific details on the training schedule for all three events have yet to be revealed, and a spokesman for the Ministry of Culture, Sports and Tourism has said sports officials on both sides are in the process of finalizing the timetable.