Tax changes for next year narrow the income gap

Tax changes for next year narrow the income gap

Korea’s tax reforms for next year will focus on narrowing the gap between those at the top and bottom, which analysts say is even more needed after hikes in the minimum wage.

Measures announced Monday include expanding the earned-income tax credit to people earning low incomes by lowering the qualification criteria and increasing the amount of credit.

The earned-income tax credit is a government subsidy given to low-income households in the form of tax refunds.

Under the proposal, a single-person household will qualify for the credit if it makes less than 20 million won ($17,876) per year, up from 13 million won under the current tax code. For a family with just one wage earner, the maximum amount of yearly salary that qualifies it for the credit will be raised from 21 million to 30 million won.

The amount of tax credit will also go up. For single-person households, the refund will rise from 850,000 won to 1.5 million won.

The Ministry of Strategy and Finance expects that the total amount of credit to qualifying families will more than triple from 1.2 trillion won this year to 3.8 trillion won next year and the number of households benefiting will go from 1.66 million to 3.34 million.

“Overall household incomes in Korea is on the rise, but the distribution index has yet to show much improvement due to the fall in wages for workers in the first quintile [the bottom 20 percent],” said Kim Dong-yeon, the finance minister and deputy prime minister for the economy. “This is one of the most painful issues our society is facing today and requires an urgent solution.”

The widening income gap between the top and bottom tiers of workers was made apparent earlier this year. In the first quarter, the income for workers in the top quintile rose by 9.3 percent while for those in the bottom 20 percent declined by about 8 percent.

In addition to the earned-income tax credit, the government will also raise the amount of child tax credit given to low-income households “to relieve them the burden of child-rearing.” 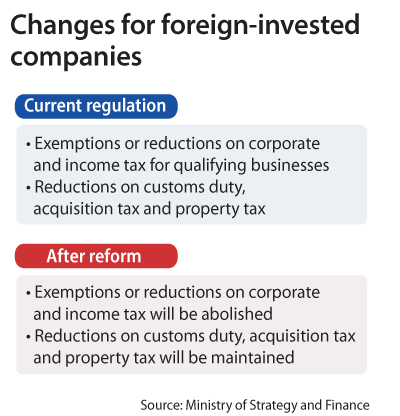 On the flip side, wealthier Koreans can expect steeper tax bills, although the increase will mainly come from real-estate ownership as corporate and income taxes on conglomerates and high-income earners were raised last year.

The so-called comprehensive real estate tax will go up as the government announced earlier this month.

Under the proposed scheme, the taxable portion of property value as well as the tax rate itself will rise, especially for people who own more than one property.

Additionally, landlords who earn less than 20 million won from renting out houses will no longer receive exemptions from paying taxes on their rental income starting next year.

Kim Byung-kyoo, deputy minister for tax and customs, said the number of landlords that will have to pay taxes will climb by 240,000 and the government revenue will rise by about 74 billion won.

Foreign-invested enterprises will no longer receive reductions or exemptions on corporate and income taxes starting next year, according to the proposal.

While mostly concentrating on addressing wealth distribution, the Finance Ministry also decided to include some timely social issues such as air pollution in the tax reform bill.

The rise in tax on coal provoked worries about higher electricity bills, a big issue due to the sweltering weather and the need to use air conditioners. Officials from the Finance Ministry, however, said the public will not see any change in the price of electricity.

“Most coal power plants and LNG power plants are operated by public organizations,” said the deputy minister for tax. “The Ministry of Trade, Industry and Energy came to an agreement with the plants that by offsetting the rise in tax for one by decreasing another, there would be no additional burden on the price of electricity.”

The ministry estimates that the government’s tax revenues will fall by about 2.5 trillion won over the next five years under the proposed scheme.

It is the first time that Korea’s tax revenues will fall due to tax reform.

Tax bills for low or middle-class households who earn less than 65 million won per year will shrink by 3.2 trillion won, while those for conglomerates and the affluent population will expand by 788.2 billion won, the ministry predicted.

Still, some economists are skeptical that expanding support for low-income earners would resolve some of the larger issues that the Korean economy is facing.

“In the Moon Jae-in administration’s economic policy, the ‘income-led growth’ policy is like a left leg and ‘innovative growth,’ which is essentially finding new growth engines for local companies, is a right leg and they must work together for the overall policy to take a step forward,” said Choi Pae-kun, a professor of economics at Konkuk University.

“The point of the tax reform is to basically compensate for the damages caused by the minimum wage hike by expanding government subsidies, but this will not be able to bring that ‘innovative growth’ necessary for [Moon’s] economic policy to see any substantive outcome.”

The Finance Ministry will submit a bill to the National Assembly at the end of next month.