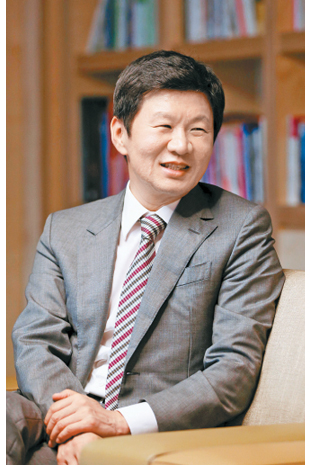 Chung will collect the opinions of members of the business organizations and propose measures to propel inter-Korean economic cooperation to the government by September, the FKI said on Sunday. The proposals will include methods to help rebuild the North Korean economy and business sectors in which enterprises from the two Koreas will create synergy through cooperation.

“Chung, as a member of the pan-Hyundai family, the symbol of inter-Korean economic cooperation, has a special sense of duty in the economic exchange between the two countries,” said the FKI in a statement. “HDC is leading the social overhead capital business, the prerequisite for economic development in North Korea - roads, railroads and ports.”

The committee is made up of 50 major businesses and North Korean experts.

Chung Mong-gyu, 56, is the son of Chung Se-yung, the group’s late honorary chairman and younger brother of the late Hyundai founder Chung Ju-yung. The patriarch’s sons and siblings run different business groups that include Hyundai Motor, HDC and Hyundai. Pan-Hyundai groups have been directly and indirectly engaged in inter-Korean businesses since the late 1990s, largely influenced by the founder’s personal interest in his hometown - the northern part of Gangwon that is now part of North Korea.

The FKI used to be a leading business lobbying group representing chaebol before the incumbent administration transformed itself into a think tank for business and the economy after it was found to have played a middleman’s role in collecting funds for impeached President Park Geun-hye and her confidante Choi Soon-sil.

“The committee will go on to canvass the opinion of international society on the normalization of inter-Korean economic relations,” said Um Chi-sung, head of the international cooperation department at the FKI.