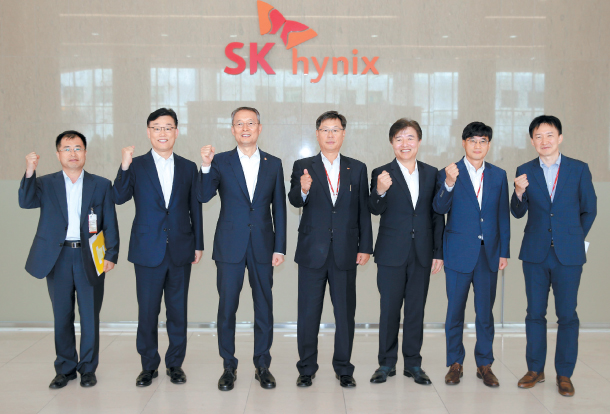 Paik Un-gyu, minister of trade, industry and energy, third from left, and SK Hynix President Jung Tae-sung, fourth from left, pose with other executives at the chipmaker’s headquarters in Icheon, Gyeonggi, on Monday. The minister visited SK Hynix and Samsung Electronics semiconductor factories to discuss measures to boost the Korean chip industry. [YONHAP]

Amid an upbeat mood in the local semiconductor industry, Paik Un-gyu, minister of trade, industry and energy, paid a visit on Monday to the two largest memory chip producers in the world - Samsung Electronics and SK Hynix - and promised a 1.5 trillion won ($1.3 billion) government fund devoted to developing next-generation chips over the coming decade.

“The government will proactively resolve difficulties private companies are facing so as to help them invest at the right time,” he said during a meeting with SK Hynix executives including the company’s president, Jung Tae-sung. “We are planning a large-scale budget to help the chip industry secure next-generation technology. The private and public sectors should join forces to maintain global leadership in the chip business.”

The Trade Ministry and the Ministry of Science and ICT will each cough up 750 billion won in the next 10 years to support research and development of next-generation processor-in-memory technologies, which do computations inside memory cells and are expected to see growing demand over time with the progress of artificial intelligence and Internet of Things.

The two ministries are scheduled to jointly file an application to the Finance Ministry for a preliminary feasibility study for the budget in August.

This is the first time the trade minister has specified the figure, even though the government suggested earlier in February it would set aside over 1 trillion won on R&D for chips after facing criticism for a long time that the government is far from interested in supporting the balanced growth of chip industries, blinded by the booming memory chip business. Semiconductors accounted for one-fifth of Korea’s exports in the first half.

Korea is a leader in memory chips but Korean chipmakers captured just 3 percent of the global market for non-memory chips, otherwise known as system semiconductors, as of 2017, an indication that the domestic industry is not balanced.

The government’s move comes amid China’s push for the “Made in China 2025” initiative. In May, the largest consumer of chips, accounting for about 45 percent of the worldwide demand, announced a new fund of about 300 billion yuan ($43.9 billion) by the government-backed China Integrated Circuit Industry Investment Fund for the development of the country’s semiconductor industry. The fund also welcomed foreign investment.

In a similar move, Paik vowed to revise regulations on foreign investment as well as environment and locations for new chip-related facilities to attract global semiconductor material and equipment producers to Korea.