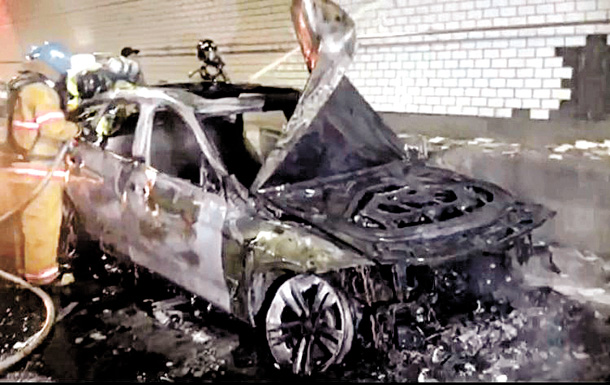 A BMW GT model caught fire while driving through an underwater tunnel in Incheon on Monday. [YONHAP]

A group of BMW 520d owners filed a class-action lawsuit against BMW Korea and its dealership over a defective part in the diesel engine that is suspected to have caused nearly 20 520ds to catch fire in Korea this year.

Just hours after the owners filed their suit, another BMW burst into flames while driving through an underwater tunnel in Incheon. The three passengers in the vehicle escaped without injury, but the incident caused major delays on the highway connecting the Port of Incheon and Gimpo, Gyeonggi.

The underwater tunnel - the longest in Korea spanning 5.5 kilometers (3.4 miles) - was not damaged by the fire.

They were not the owners of vehicles that have recently caught fire.

The plaintiffs are seeking 5 million won ($4,466) each as compensation for the impact that the recent fires have had on their usage of their own vehicles.

“The amount is calculated based on three standards including the interrupted usage of their cars due to fear that they will catch fire, the value deterioration in the secondhand car market and the mental damage they have to go through,” said Ha Jong-sun, an attorney at Barun Law, which is handling the case.

“The number of BMW owners and the amount of compensation they will ask for will only increase in the future,” Ha added.

A separate lawsuit was filed last week against BMW Korea, this time by an owner of a 520d that actually had burst into flames.

The plaintiff reportedly sought 10 million won from the German carmaker over the “unfair” compensation that BMW Korea proposed regarding the burnt-out car.

If a victim has already been compensated for the damaged car through their own insurance, BMW Korea said its policy doesn’t allow for double compensation. It said that, in that case, it cannot pay damages to the victim.

BMW Korea and the Transport Ministry last week announced a recall of over 106,000 vehicles from 42 different models that have the possibility to catch fire due to a defective engine part called the EGR.

The carmaker said it will launch an official recall from mid-August after it secures enough parts for replacement.

Fears are quickly spreading among not only BMW drivers but also those that share the road with them about the fact that a fire could break out anytime anywhere until the recall takes place. Even if a recall launches next month, the replacement of defective parts will not happen overnight for all 106,000 units.

A series of national petitions have launched on the Blue House website calling for the fire-prone 520d models to be banned from Korean roads until the recall is finished. One of the petitions laid out the danger of a vehicle bursting into flames in a tunnel. The author suggested that in such an incident other cars could also catch on fire.

More than 27 cases have been reported this year to the Transport Ministry regarding BMW vehicles catching fire, a majority of which were 520ds.

Nine 520ds have caught fire in July, including one on Sunday.