‘Shoplifters’ director on family and thinking globally : Hirokazu Kore-eda’s film tells the story of a home that challenges tradition

‘Shoplifters’ director on family and thinking globally : Hirokazu Kore-eda’s film tells the story of a home that challenges tradition 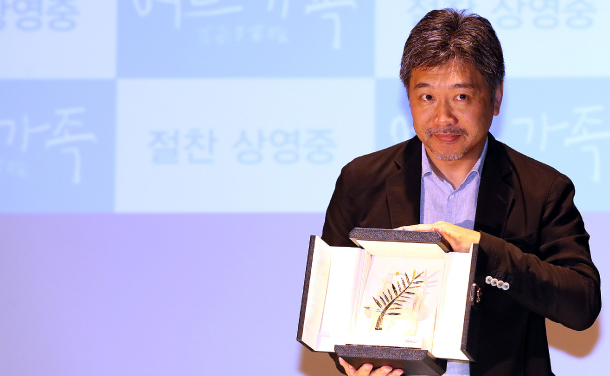 Director Hirokazu Kore-eda at a press event held in Seoul on Monday while holding onto the Palme d’Or trophy he received at Cannes Film Festival in May for “Shoplifters.” [YONHAP]

You can pick your friends, but you can’t choose your family - at least that is what society tells us. But Japanese auteur Hirokazu Kore-eda defies the traditional meaning of family in his latest film “Shoplifters.”

The winner of Palme d’Or at this year’s Cannes Film Festival, held in May, the modest drama makes an impact through a group of frightened and damaged people banded together as family and trying to make the best of things from day to day.

“I wanted to delve into the idea of a group of biologically-unrelated people forming a community,” said the director during a press event held in central Seoul on Monday. “I don’t think there should be a fixed definition of a family. Family can be represented in many different forms, and I approached the film based on that attitude.”

The movie follows a loosely related family of drifters who live in a rented bungalow tucked out of sight in the Tokyo suburbs. This group may look like a perfectly normal extended family, consisting of a husband and wife, a teenage daughter, her kid brother and a grandma. But what makes them a family is the connection in their hearts instead of their genes. As the title implies, the family survives by running petty scams.

The film begins with Osamu (Lily Franky) bringing a young Shota (Jyo Kairi) along for their usual shoplifting rounds. On the way back home, they discover a shivering young girl (Miyu Sasaki) who shows signs of having been abused. Worried that she might freeze to death, the duo brings her home.

Though having an additional mouth to feed is not welcomed at first by the financially struggling family, they soon accept and appreciate having a new addition to the household. Though small, the change that the girl brings to each member’s life is grand. 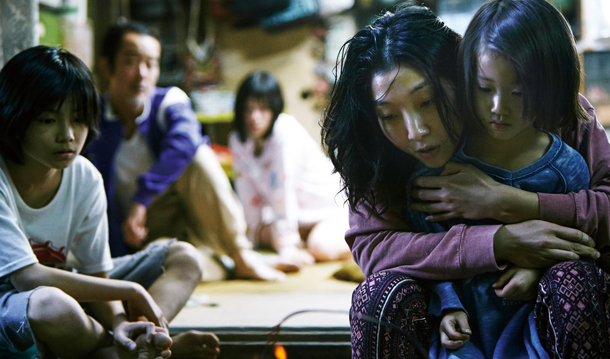 “Shoplifters” is about a group of people that form a family of their own and live under the same roof. [TCAST]

Through the warm and gentle drama, the movie demonstrates that people can find comfort even in the worst economic conditions while at the same time picks out on the defects of the existing state system that fails its neediest individuals.

The film has received widely different interpretations. While some describe the open ending as a gloomy forecast for the protagonists, others understand it as an optimistic future.

“How the film ends is a matter of how the audience chooses to interpret,” said the filmmaker. “I personally believe a movie should be accepted as itself. If the director has to offer a supplementary explanation, then it’s an immature work.”

Family has been an essential part of Kore-eda’s cinematic world, as was shown in “Our Little Sister” (2015) and “Like Father, Like Son” (2013). While “Shoplifters” is also a story of a family, the director said, “Instead of focusing on family drama, my core attention was on the friction that arises at a point when a [nontraditional] family meets society.”

When asked whether he will touch the topic of family again in the future, the director said, “Though I don’t have anything specific in mind right now, I could be inspired by the rapidly changing forms of family.”

“Shoplifters” was the number one film when it was released in theaters on Thursday, dominating the top spot for four days straight. It has sold a total of 39,000 tickets as of Sunday, according to data by Korean Film Council.

While expressing gratitude for the film’s popularity in Korea and the opportunity for the movie to be released internationally, the director also criticized Japan’s unmotivated film industry that is narrowing its scope.

“There have been a number of internationally-acclaimed directors from Japan like Kurosawa Akira and Ozu Yasujiro, and Japanese cinemas still seem to be enjoying the glory of the reputation earned from the past.”

“[Directors in Japan] these days tend to make movies, only aiming for domestic release. If this trend continues, some of the really talented [cineastes] will be confined to working in only the domestic market while their vision continues to narrow. I’m continuously challenging myself to divert from the direction the Japanese film industry seems to be heading.”

For his next movie, Kore-eda will be working with French stars Juliette Binoche and Catherine Deneuve, and American actor Ethan Hawke.

Titled “La Verite,” the film centers on a married couple who returns to France from the United States. While reuniting with the wife’s mother, untold truths are revealed.

“While it used to be a matter of whether my films could resonate with international viewers, the essential part of my next film will be whether I can make a movie with people from different cultures and languages,” said the director.

“If the film gets a positive response, I want to use the success as a stepping stone to work with Korean actors.”