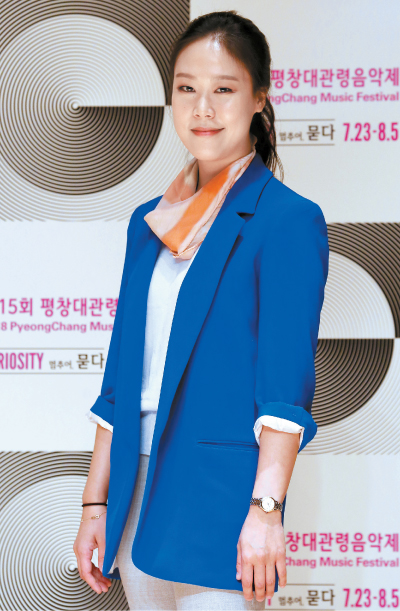 After the 2018 PyeongChang Winter Olympics came and went, the fate of the classical music festival created in 2004 in an attempt to bring the Olympics to Korea remained up in the air. Like the Olympic Stadium, it may have been scrapped if it wasn’t for pianist Son Yeol-eum, who decided to pick up the baton as the festival’s artistic director in March, after the previous co-directors stepped down in January.

She not only had a limited time to put together a 14-day festival and school program, but she has dealt with difficulties such as drawing people’s attention back to Pyeongchang and proving that the region will continue to be a festive place twice a year. The young director successfully pulled it off and kicked off the 15th PyeongChang Music Festival and School on July 23, allowing the sounds of classical music to resonate once again from the Alpensia Resort.

One of the highlights of the festival’s program was Son playing the piano for the “Going Home” concert on Saturday accompanied by an orchestra composed of Korean musicians who work in overseas orchestras and foreign musicians who belong to Korean orchestras. Son says she wanted to shine the spotlight on the orchestra, not on herself, for this concert, to show the “beauty of musical harmony from those who have found freedom through a communal embrace while everyone else dreamed of being in the spotlight.”

To learn more about this year’s festival and school, as well as her upcoming plans, the Korea JoongAng Daily sat with Son prior to her Saturday concert for an interview. The following are edited excerpts.


Q. At the beginning, many had doubts about you taking up the position as you are relatively young compared to previous artistic directors, who were all in their 70s. The role indeed seems quite heavy for a busy 32-year-old concert pianist. How are you handling it?

A. From what I know, the previous artistic directors had about a year to prepare for each festival. But I began in March so I really had no time. But I managed to put it together by sleeping only about three to four hours a day. I was quite concerned at first, but towards the end, I was quite surprised that we even managed to increase the number of concerts from last year. Because I wasn’t planning to take up this position, my calendar was already filled with many concerts. I couldn’t cancel them, and it was really difficult to juggle so many different things at once. I was especially busy in April, and in the past two months I think I had to perform in about 15 concerts. Because of the limited time, I had to give up on some things that I would’ve liked to have at the festival.


What did you have to give up?

I wanted to have more outdoor performances. The weather is cooler here and there are vast green lawns where people can just sit or lie down and casually listen to classical music. It’s quite a common scene at European festivals so I wanted to have that this year but there was not enough time. As you know, the instruments are very sensitive to humidity, and although an outdoor concert seems casual and impromptu, it requires a lot of preparation. We won’t be able to do that for the winter festival, but perhaps next summer.


There seems to be some changes to this year’s school program for students. What are they?

First, the name has been changed to “Academy.” Before, it was literally like a school. There were mostly one-on-one lessons, but starting this year we included more sessions where students collaborate, like expanded orchestra programs, concertos and so on. It’s because it’s not too difficult for these students to take lessons from teachers on their own time, but only at a festival like this can they really meet students from across the globe and learn from each other.

Moreover, we’ve added a special session where students learn things other than just music. There’s a gym class for example, so that they can learn how to develop strength in order to perform better as a musician, learn about stage presentation or just the basics of how an instrument is made. The reason why we’ve included this is because I believe students these days are talented musically. They have no problem in terms of their skills but they’ll be distinguished in other fields.


Did the previous artistic directors give you any words of advice?

Violinist Chung Kyung-wha actually told me something that I always want to remember. She didn’t say much about the festival, but while operating the school, she said it’s really important to help young musicians find personal happiness. Many of them started playing their instrument when they were young and they perform under [an intense] spotlight, receive attention and seem happy on the outside, but at the same time, many suffer from depression and have no personal joy as a musician. She said it is important as an artistic director to make sure they at least discover that joy in music while they are here in Pyeongchang, surrounded by good people and no stress.


Previous festivals touched on different themes covering different regions, like music from northern Europe, southern Europe, Russia and so on. It seems there’s no more left for you to pick. Is that why you’ve decided pick this year’s theme as “Pause, and Seek”?

As Koreans, classical music came to us from afar, but it is now close to us here and now. This “Curiosity,” is also another theme of not only this year’s festival, but can represent how I would like to make this festival in the future.


For audience members who can only visit the festival for several days, what concerts would you recommend?

It’s difficult to pick but I would probably recommend watching the concerts on Aug. 1, 2 and 3. These are three very different concerts. For example, the concert on Aug. 1 has a specific theme, the year 1918. The program consists of “Violin Sonata” by Debussy, who died that year, Bernstein’s “Clarinet Sonata,” who was born that year, as well as works by Elgar, Stravinsky and Bartok that were written or premiered that year. The next day, there’s this grand piece by Mozart titled “Grand Partita.” It’s a difficult piece, therefore it has not been performed much. On Aug. 3, the concert is titled “TGIF,” and it features many joyful songs for those who want a real festive feeling.