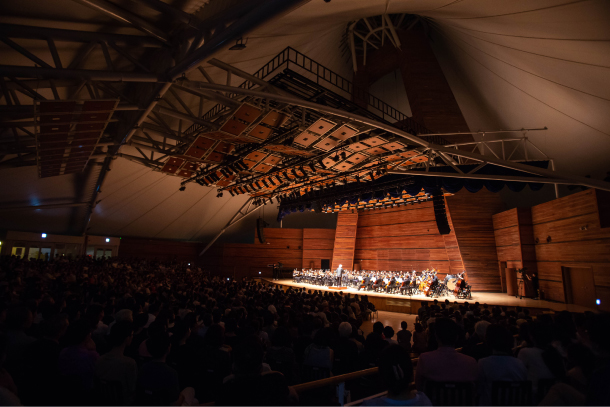 The 15th PyeongChang Music Festival kicked off on July 23 and will run until Aug. 8 at the Alpensia Resort in Pyeongchang, Gangwon. The “Going Home” concert took place on Saturday. [PYEONGCHANG MUSIC FESTIVAL AND SCHOOL]

PYEONGCHANG COUNTY, Gangwon - Fans of the annual PyeongChang Music Festival kept their fingers crossed, hoping that their beloved annual outing in this eastern part of the country, where for years they’ve been enjoying classical music and a cool summer breeze, wouldn’t be taken away from them following the end of the 2018 PyeongChang Winter Olympic Games. Their worries are now behind them, as this year’s festivities successfully kicked off on July 23 and its new artistic director Son Yeol-eum has assured audiences that the festival will continue as “one of Gangwon Province’s major festivals,” and that they will keep the winter version of the festival as well.

“There was word that the festival would no longer be held because there’s no more need to promote the area,” said Seo Myeong-won, a 50-year-old housewife from Seoul, who said she’s been visiting here with her friends every year since 2014.

“We were so glad that we can still maintain our annual summer retreat,” Seo added. “We are also happy to see young pianist Son heading the festival. I have no doubt that she’ll bring a fresh energy to it.”

This year’s festival has indeed been full of life. It kicked off at the Alpensia Resort on July 23 and nearby areas in Gangwon Province for the festival’s so-called “Outreach Concerts.” The festival continues until Sunday.

The 32-year-old Son says she felt a bit burdened to spearhead the prestigious classical music festival that’s become an international, right after former co-artistic directors Chung Myung-hwa and Chung Kyung-hwa, who “are veteran artists with a lot more connections with other renowned artists across the world.”

But the outcome attests to her modesty. Using her youthfulness as a strength, she managed to gather young classical musicians from around the globe to form this year’s festival orchestra including Kim Doo-min, principal cellist of the Dusseldorf Symphony Orchestra in Germany, flutist Cho Sung-hyun, who is currently a member of Cologne Philharmonic in Germany, Cho Inn-hyuck, a principal clarinetist at the Metropolitan Opera Orchestra, Cho Seung-ho, chief clarinet of the Tokyo Philharmonic Orchestra, Kim Hong-park, a principal horn player at the Oslo Philharmonic in Norway, among many others.

From left: Pianist Son Yeol-eum, the newly appointed artistic director of the festival performs during the “Going Home” concert on Saturday; Music students participating at the festival’s School program listen to a special lecture about stage presentation on July 23; a student takes a Master Class by Antti Siirala, left, a piano professor at the Munich University for Music on July 24. [PYEONGCHANG MUSIC FESTIVAL AND SCHOOL]

Accompanied by the festival orchestra she’s personally gathered, Son stepped out of her role as an artistic director for a while on Saturday evening, and performed at one of the highlight concerts titled “Going Home,” at the Alepnsia Resort’s Music Tent. They played Rachmaninoff’s Piano Concerto no. 2 in C minor, op. 18 and Tchaikovsky’s Symphony no. 4 in F minor, op. 36 under the baton of Russian maestro Dmitrij Kitajenko, who used to conduct the KBS Symphony Orchestra in Seoul between 1999 and 2004.

Thanks to the unprecedented heat this summer, the festival also has seen more first-time visitors. Since the area is at a high altitude, its temperatures have been lower, attracting swarms of summer vacationers.

“My family rented a caravan and came down here on Saturday to spend our week-long summer holiday,” said Park Tae-heum, 48, who was visiting the festival on Sunday with his wife and two kids. “We saw posters of this festival near our camping site so decided to come and have a casual cultural experience.”

The Parks managed to purchase tickets at the door for the 5 p.m. concert on Sunday. Park says he was worried that he wouldn’t be allowed into the concert hall as he and his son were wearing slippers and shorts.

“There were many others who were dressed casually and except for my wife, it was our first time attending a classical music concert. I really enjoyed the time and so did my children.”