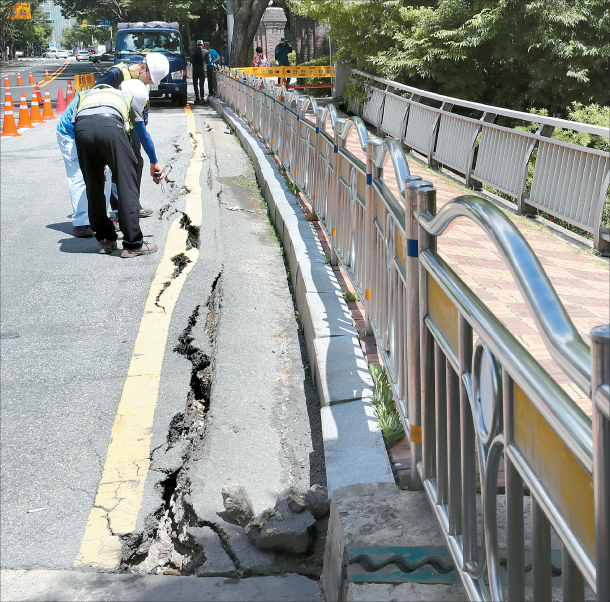 Local authorities inspect the cracks in an asphalt road on a bridge in Bundang District, Gyeonggi, on Monday morning. A water pipe on the road broke Sunday night, which authorities suspect was caused by the extreme heat. [NEWS1]

Railway tracks are expanding in the extreme heat, raising the risk of trains derailing on buckled tracks. The national railroad company is reacting by slowing down some trains and delaying others during the heat wave.

The Korea Railroad Corporation (Korail) delayed the schedules of two KTX trains from Seoul to Busan around 8:05 a.m. Monday after it found that some tracks appeared to have expanded near Geumcheon-gu Office Station in southern Seoul.

The two trains were delayed some 10 to 30 minutes, and Korail announced around 9:30 a.m. that all trains are running normally.

The company said it suspects extreme heat expanded some steel tracks but will need to investigate further to find out what happened.

On July 23, Korail limited the speed of high-speed trains on the Gyeongbu High Speed Railway to 70 kilometers per hour (43.5 miles per hour) after it confirmed that steel tracks between Cheonan-Asan Station in South Chungcheong and Osong Station in North Chungcheong were heated to around 61.4 degrees Celsius. The high-speed trains on this line usually operate at 300 kilometers per hour.

Some 16 trains were delayed on the line between Cheonan-Asan Station and Gwangmyeong Station in Gyeonggi on Sunday night for about an hour and a half, after a local communications system failed. Korail said it had tentatively concluded that the heat was not the cause of the system failure.

Unrelenting heat is also leading to fractures in asphalt roads.

The pipe, installed alongside a 20-meter (65-foot) wide and 25-meter long bridge, broke around 10:14 p.m., Bundang Police Precinct said. There were no injuries involved, police said. The pipe was repaired but the bridge has been closed since.

As many as 2,015 people fell ill from the heat between the end of May and Saturday, according to the Korea Centers for Disease Control and Prevention (KCDC). Another 27 people died. Some 894 got sick and 13 died within the past week alone, when the average high nationwide was hovering at or above 30 degrees Celsius.

The KCDC said this year was the worst for heat-related deaths since it began recording figures in 2011. The second-highest was in 2016, when 17 people died.

Central and local governments are reacting to the heat. Bills to designate heat waves as a natural disaster, which would increase government support for compensation for heat-related illnesses and deaths, have been introduced at the National Assembly.

Seoul Mayor Park Won-soon, who is living in a rooftop house in Gangbuk District, northern Seoul, for a month without air conditioning, hosted a meeting at the Gangbuk District Office on Monday to call for designation of heat waves as a natural disaster on the city government level.