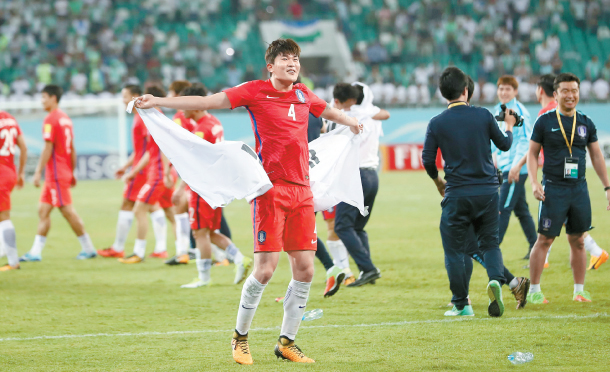 Kim Min-jae, the Jeonbuk Hyundai Motors’ ace center back, still remembers the pain of May.

He was carried off the field after attempting a block against Daegu FC on May 2. When he returned to the locker room, he realized the extent of his injury: a hairline fracture in his right shin. He couldn’t stop crying.

After receiving medical treatment for four weeks, Kim received the news he never wanted to hear: He failed to make the World Cup team.
It was a particularly brutal sting for the center back who earned the nickname “The Monster” for his performance in the national team’s Asian qualifiers for the World Cup last year.

Now, two and a half months since that fateful injury, Kim is eager to get back on the pitch. He will be the anchor of the Taeguk Warrior’s defense at the Asian Games in Indonesia next month.

On a hot Thursday with the temperature closing in on 40 degrees Celsius (104 degrees Fahrenheit), he was overflowing with energy and enthusiasm despite the suffocating humidity at the Jeonbuk Hyundai Motors’ clubhouse in Wanju County, North Jeolla.

“I feel like I’m coming up faster because of the hot weather,” Kim said. He had just finished rehab on July 18 and rejoined his team before their match against Jeju United. “Indonesia’s weather is also hot, so this training is going to help me adapt. Even though my fitness right now is at 70 to 80 percent, I will bring it up to 100 percent before the Asian Games.”

Kim shot to fame like a comet last year. Though he is turning 22 this year, his composed defensive presence reflects that of a player with more years of experience and has been indispensable for both Jeonbuk and the national team. He won the K-League’s Young Player Award last year, and in April, there were reports that he was receiving interest from Tottenham and Liverpool among other English Premier League teams. But that sudden injury in May brought his budding career to a halt.

“I was anxious because that was the first time I had to leave the stadium from an injury,” he recalled. “As a result, I cried when I was alone.”

Receiving the diagnosis put him at ease. The support of fellow teammate Kim Jin-su, who also suffered an injury before the World Cup, helped lift his spirits, too. “Jin-su got injured four years ago [before the Brazil World Cup] and then again [this year],” he said. “Jin-su told me, ‘I still play even though I did not get to play in the World Cup [four years ago]. You, too, will get your chance in four years.’ I got a lot of strength from his words.”

The center back watched his teammates compete in Russia on the television. “I respect the older players,” he said. Kim was especially impressed by the way Kim Young-gwon and Jang Hyeon-soo prepared for the World Cup. “Even though I could not play with them, I have become stronger as a player,” he said. “I am looking to steadily develop and get the opportunity to play in the next World Cup in four years.”

The first step in that journey will be the Asian Games, which begin on Aug. 18. Despite playing on the national team for qualifying matches, he has never made it to the final roster for the Youth World Cup, Olympics, or World Cup. The Asian Games will be the first time that Kim has made it to the final team roster. “It makes [the tournament] that much more important for me,” he said, “and I want to prepare better than I ever have before.”

The road ahead will not be easy. On July 25, the United Arab Emirates was added to Group E, so Korea will have to play four rather than three matches in the group stage. With no defenders in the wild card slots, Kim bears the heavy responsibility of leading the backline.

And because many of the opposing teams are weaker than Korea, they will likely sit back deep. Korea will likely push forward, meaning Kim — and the rest of the defensive line — will be alone at the back and need to be more wary of counterattacks in this tournament.

“Early in the season, I played 12 matches in a month and a half for the national team and my club, so I am confident in my ability to maintain my fitness,” Kim said. “In the Asian Games, I want to have a defense that frees up our attack. If the backline is not reliable then our attacking players cannot relax. I will lead the backline so that the attack can play with freedom.”

Kim has high expectations for Hwang Hee-chan, the striker from Red Bull Salzburg who is the same age as Kim. “Back when we played together in the same youth program, we had a go-to play,” he said. “When we would switch the field, Hee-chan would quickly slip behind the opponent’s backline and I would play a long ball over the top. I liked this play a lot. I want to do it in the upcoming tournament.”

When asked which teams he wanted to beat the most, the eager center back said Iran and Japan. When he played for the national team in the World Cup qualifiers last August, he made an appearance against Iran and showed his competitive spirit when an Iranian player stepped on his head after competing for a header.

“I want to beat Iran, which is strong defensively,” he said, “and it goes without saying that I really want to beat Japan
His ultimate goal, of course, is to help the team win a gold medal, but he also wants to do it without letting up a single goal. “I want to end with a clean sheet in all eight games,” he said, including four group-stage matches and four playoff matches.