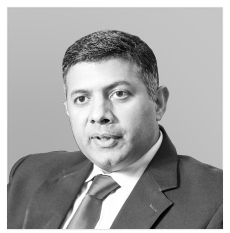 Vikram Doraiswami
The author is India’s former ambassador to Korea.

President Moon Jae-in’s recent state visit to India from July 8 to 11 was a high water mark in our ties. Not only was this the longest and most wide-ranging visit by a Korean president to India, Moon was also the most visibly welcomed by his Indian hosts. While formal outcomes were plentiful, the leaders’ excellent chemistry was the most visible and welcome result of the visit.

As the leaders’ joint statement suggests, the new focus of our ties is a future-oriented partnership for peace, prosperity and the people: the “three P’s plus future.” This is built upon synergy between India’s Act East Policy and Korea’s New Southern Policy - approaches that naturally meet in the new perspective of an open, inclusive, rules-based, stable and secure Indo-Pacific community.

The special tone for the visit was set much earlier. Prime Minister Narendra Modi was among the first world leaders to call and congratulate President Moon upon his election last May. And President Moon sent a special envoy to Delhi — for the first time ever — to convey to India his determination to raise ties to a level commensurate with the title of a special strategic partnership, on par with Korea’s traditional four partners.

For those involved in building the relationship, it was no surprise that President Moon chose to visit India more or less within his first year in office, or that the Indian side would do all it could to make the visit truly special.

And so it was that the citizens of Delhi were treated to the seldom-seen spectacle of banner-size portraits of the visiting president welcoming him and the first lady to India. That apart, even before the formal ceremonial welcome and official talks, Prime Minister Modi spent almost half a day with the visiting dignitary.

For the first time ever, an Indian prime minister personally escorted a foreign dignitary to India’s memorial museum to Mahatma Gandhi, showcasing the value attached to peace and reconciliation.

And again for the first time, Prime Minister Modi joined President Moon in inaugurating a new factory of a foreign enterprise: a nearly ＄800 million Samsung facility that is now the company’s largest mobile phone factory in the world, with the capacity to make 10 million smartphones a month for India’s market and for export.

A particularly special moment was the decision by the prime minister and president to travel to the Samsung facility using the Delhi metro. This was not merely to save the city’s infamously congested traffic; it was a nod to Korea’s role in India’s mass transport revolution (rolling stock in many Indian metro lines comes from Hyundai Rotem).

And of course, as instinctive men of the people, both leaders genuinely enjoyed interacting with the citizens of Delhi at metro stops and vice versa. President Moon reciprocated the unique attention accorded to him not only in an impressively warm tweet about India and its people, but also by gifting Prime Minister Modi a traditional Korean watercolor portrait of his host.

This portrait, specially commissioned from the well-known artist Kim Ho-seok, deployed the traditional technique of eojin on paper made from Indian and Korean mulberries. Even soil from Prime Minister Modi’s birthplace was used in the paint.

Happily, the substance of the meetings matched the warm rapport between the leaders. Calling President Moon a “visionary leader,” Prime Minister Modi offered India’s full support for the inter-Korean peace process, in recognition of its humanitarian involvement in the tragedy of the Korean War and in reflection of the shared impact on our respective security from proliferation links between Northeast Asia and South Asia.

President Moon, in turn, appreciated Prime Minister Modi’s briefing about India’s approach to a free, open, rules-based and inclusive Indo-Pacific order, recognizing Asean centrality. On the bilateral track, the two leaders agreed to step up the pace of bilateral summits, military-to-military engagement, and the frequency of contact at ministerial and other levels.

On the economic track, the leaders decided to task both officials and the India-Korea CEO’s Forum to build upon the new momentum in our trade and investment flow. After all, for the first time in nearly eight years, bilateral trade grew by nearly 30 percent on both sides, and Korean investment in India over 30 months was ＄3.5 billion, with more in the pipeline.

In this spirit, amid a worrying global trend toward protectionism, India and Korea completed an Early Harvest Agreement to signal our faith in mutually-beneficial free trade. The two sides will implement areas of agreement already reached in the last several rounds of negotiations to upgrade our existing free trade arrangement, CEPA, pending finalization of the rest of a new CEPA. This is an important signal not only to our businesses, but also to the world, as Asia’s third and fourth largest economies showcase their determination to secure growth for the foreseeable future from this partnership.

Traditionally strong in research and science, India and Korea have also decided to work together to lead the fourth industrial revolution. As Indian capabilities in pure science and research pair well with Korea’s formidable ability to improve upon innovation and bring new technology to the market, we also agreed to co-fund and set up joint innovation centers.

Our leaders also agreed that the people of both sides must be more involved in building this friendship. With flight services tripling in the past three years, the two leaders directed the establishment of a joint working group to simplify visa arrangements.

Meanwhile, India has unilaterally decided to make Korea only the second country in the world to whom visa on arrival services will be extended. This is a unique gesture of India’s confidence in the Korean people and an opening for Air India, Korean Air and Asiana to promote two-way travel to suit the warmth of our friendship.

As outgoing ambassador, it is only natural to feel a sense of satisfaction at the new energy unleashed by our leaders’ meeting. But the reality is that there is still far too much untapped potential in this partnership, and there is no room for complacency. If it is indeed the case that durable partnerships are those that are built step by step, then the time has come for both sides to devote more energy and attention to following the path so clearly set out before us by the two leaders.