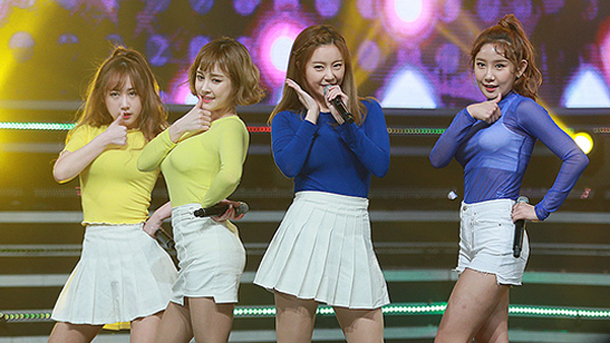 Girl group Six Bomb, who caused a controversy last week after it released a music video teaser that took visual cues from pornographic videos, released the song “Hiccup Hiccup” and its music video at 6 p.m. on Tuesday.

The song and video were originally scheduled to drop at 12 p.m. on Tuesday, but the group’s agency Pacemaker Entertainment delayed the release “due to internal circumstances.”

The music video teaser was deemed controversial for its Japanese adult video concept. The video begins with a fake copyright statement and a “19” sign, which is used as a warning that the film contains content that may be inappropriate for children. The teaser shows each of the girls meeting with men who appear to be strangers.

“Hiccup Hiccup” is about a man and a woman who are attracted to each other and gets the hiccups, a sign that confirms their feelings for each other.

Six Bomb made their debut in 2012 and are known for their extreme marketing efforts, including wearing a pink sausage-like costume in the video for their song with a title that translates to “Wait 10 Years Baby” (2016), and showing the members’ faces before and after plastic surgery in their music video for “Getting Pretty” (2017).