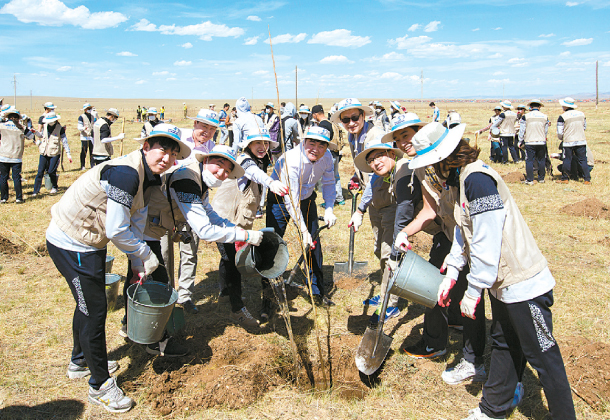 Korean Air employees participate in a tree-planting ceremony at an eco-park in Ulaanbaatar, Mongolia. [KOREAN AIR]

As a leading global airline, Korean Air works on a variety of charitable activities both inside and outside the country every year. Korean Air’s efforts to contribute to society fall under four categories: natural disaster relief, global environmental protection, in-house employee charity and work to foster the next generation. This is based on the “sharing business” management philosophy of Cho Yang-ho, the president of Hanjin Group. Cho emphasized that sharing is an important foundation of a healthy society, so companies need to work on corporate social responsibility.

Korean Air has been doing charitable activities related to the aviation industry, such as giving relief to disaster areas quickly using its global transport network. Recently, Korean Air has sent support to Laos following its dam collapse. On July 27, Korean Air sent water and blankets by flight KE461 from Incheon to Da Nang, Vietnam, as emergency aid. It was the first local company to provide aid to Laos after the dam collapse. Korean Air also sent relief to Pohang, South Gyeongsang, which was hit by an earthquake last November. Korean Air sent 3,600 liters (951 gallons) of water and 3,000 blankets. It also sent 9,000 liters of water and two tons of emergency kits when there was a flood in Peru last April.

Korean Air puts effort into tackling global environmental issues. Executives and staff members are participating in tree-planting campaign in Mongolia, which is suffering from desertification. Korean Air established an eco-park in Ulaanbaatar, Mongolia, and planted 44 hectares of forest. About 100,000 trees have been planted in the Mongolian desert. Korean Air also has been visiting the Kubuchi Desert in China every year to plant trees in the Korean Air Eco-Park since 2007. Korean Air’s global planting campaign not only prevents desertification, but also will serve as an erosion control forest that will improve the environment of Northwest Asia.

Korean Air is working on various activities along with its employees. There are 27 in-house voluntary groups that 4,000 employees are actively participating in. One example of an in-house volunteer group is Sky Angel, which is composed of cabin crew members. Sky Angel operates a Sky Love Bazaar every year. Sales are made with donations from the employees, and the profits are consigned to Gangseo District Office in western Seoul and delivered to social welfare organizations. In-house volunteer groups work both in Korea and abroad. The Sanasa (people who share love) group traveled to Tondano, Sulawesi, Indonesia, to build an orphanage and repair facilities.

Korean Air also has been donating its talents. It has opened English schools since 2009 to offer learning opportunities to elementary students living near Incheon International Airport who have difficulties getting English tutoring after class. The instructors are English-proficient Korean Air employees working at Incheon airport who have a passion for education. Students learn how English is a communication tool that helps them enjoy various cultures through English fairy tales, songs and comics. Korean Air has also been constructing libraries for children in China since 2010. It has built libraries in the Chinese countryside and supports them to create a better educational environment.

Korean Air is planning to build a sustainable sharing business to fulfill its corporate social responsibility.