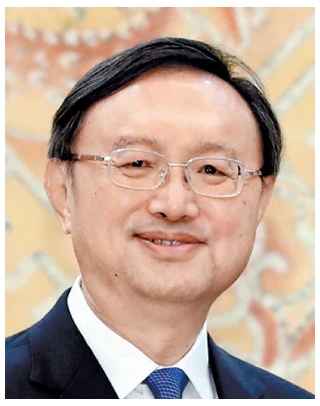 Chinese State Councilor Yang Jiechi made a secret visit to Seoul in mid-July and met with President Moon Jae-in’s security adviser, Chung Eui-yong, possibly to discuss declaring an end to the 1950-53 Korean War, the Blue House said on Tuesday.

A senior presidential official acknowledged the visit by the senior Chinese diplomat and his meeting with Chung without disclosing the exact date. The acknowledgement came hours after the Dong-A Ilbo reported the undisclosed visit.

While details of the meeting between Yang and Chung were not disclosed, it is likely the two discussed declaring an end to the Korean War, which ended in a truce, not a peace treaty, with the signing of an armistice on July 27, 1953.

According to the Dong-A, the two officials discussed Beijing’s possible lifting of a ban on Chinese group tours to South Korea as well as some kind of environmental cooperation to ease air pollution in China and Korea.

When asked whether the issue of Thaad was addressed, the Blue House official said “it was likely.”

“We kept it undisclosed for the sake of a smooth dialogue between the two nations,” continued the official, adding that the talks between Yang and Chung proceeded “in a good atmosphere,” though no definitive agreements were reached.

The two officials were also likely to have discussed formally declaring an end to the Korean War, a political act that would not carry legal force but a symbolic statement.

Earlier, South Korea appeared to be pushing for a declaration of an end to the three-year conflict by South and North Korea and the United States, without China’s participation.

The idea was that China could join later in signing a peace treaty after the end-of-war declaration. But Beijing signaled it has no intention of being excluded from a declaration as one of the three signatories of the armistice.

On July 27, 1953, the militaries of China and North Korea and the U.S.-led United Nations Command (on behalf of South Korea) signed the armistice in the border village of Panmunjom.

China sent hundreds of thousands of soldiers across the border at the height of the conflict to save its communist ally from being overtaken by U.S.-led multinational forces in November 1950, resulting in the deaths of more than 100,000 Chinese soldiers, including a son of Chinese leader Mao Zedong.

The official noted that the Blue House was open to having China on board to discuss declaring an end to the Korean War.

“While it remains to be seen whether the declaration will be trilateral [the two Koreas and the United States] or quadrilateral [including China], we are not excluding the optics of a four-way declaration,” the official said. “We never said it [declaring an end to the war] had to be trilateral.”

The official emphasized that whether the declaration is made is “more important” than the format - whether trilateral or quadrilateral.

The presidential official denied reports that the Blue House wrote a draft of a declaration to end the Korean War prior to the summit between U.S. President Donald Trump and North Korean leader Kim Jong-un on June 12 in Singapore in case one was needed.