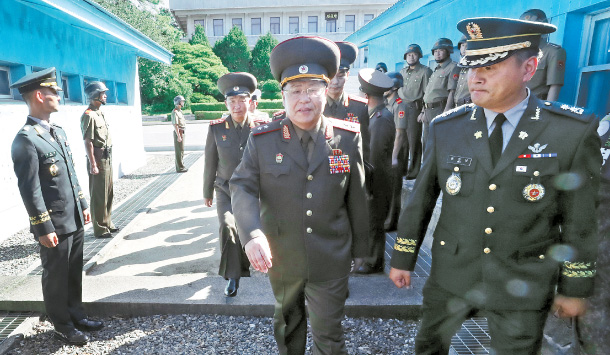 Lt. Gen. An Ik-san, heading a North Korean delegation, crosses to the southern side of the border village of Panmunjom for high-level inter-Korean military talks on Tuesday, the second such talks in 47 days. [JOINT PRESS CORPS]

High-level military talks led by generals from the two Koreas were held Tuesday at the Peace House on the southern side of the inter-Korean truce village of Panmunjom, and the two sides agreed on disarmament issues in the Joint Security Area (JSA) and to excavate remains of soldiers at the inter-Korean border. It was 47 days since the last such talks in June.

The talks kicked off at 10 a.m. and the South’s five-member delegation was led by Major Gen. Kim Do-gyun, who is in charge of North Korea policy at the Ministry of National Defense in Seoul. The North’s five-person team was led by Lt. Gen. An Ik-san. This marks the ninth round of inter-Korean military talks between generals.

Military talks were revived after the April 27 summit between President Moon Jae-in and North Korean leader Kim Jong-un, which produced the Panmunjom Declaration, and a surprise follow-up meeting between the two leaders on May 26.

The first meeting between generals from the two Koreas in nearly 11 years took place on June 14 at Tongilgak, a North Korean-controlled building in Panmunjom in the demilitarized zone (DMZ). The last such high-level military talks were held in December 2007.

Kim and An also led the discussions in June, and the two sides issued a joint statement that agreed to restore military communication channels. They also agreed to regularize such military meetings.

A Seoul defense official said that the two sides “shared understanding” on issues that were not covered in the June 14 joint statement, such as the disarmament of the JSA, along with discussions to withdraw guard posts from the DMZ. But the official added “detailed implementation and methods will be discussed through various channels later.” This could lead to efforts to transform the DMZ into a “peace zone,” as agreed upon by the two leaders in their April 27 summit.

Another topic discussed was a joint excavation project in the DMZ to recover bodies of soldiers killed in the Korean War. It was unclear if the two sides agreed on any measures to turn the Northern Limit Line (NLL), the de facto maritime border, into a “maritime peace zone.” This was a topic that had been discussed by the two sides in previous talks and also in the Panmunjom Declaration, which called for a peace zone to prevent accidental military clashes and guarantee safe fishing.

In remarks at the beginning of the talks Tuesday, An referred to a recent South Korean report ahead of the military meeting that said the North is trying to sway the United States and the South towards a formal declaration to end the 1950-53 Korean War.

“I listened to a YTN report the other day which was predicting all the topics that I would discuss face to face with Gen. Kim Dong-kyun today,” said An jovially. “I think it was wonderful.”

He continued, “It even said that we tried to shake up the United States, but that didn’t work out, so this time, we are trying to shake the South to push for the declaration of the end of the Korean War. I think it is a possibility.”

An pointed out that, before he could vouch for the “authenticity” of this report, he “learned that the North and South Korean people placed that much consideration on the talks” and that he has “realized the sense of duty and role military authorities have in the inter-Korean efforts toward peace and prosperity.”

In turn, Gen. Kim Dong-kyun referred to a saying that “grain will not grow well if it is not tended to,” as an analogy to inter-Korean relations.

“Through the April 27 Panmunjom Declaration last spring, I think the seeds have already been sowed,” he continued.

“That is why, through this process of putting our heads together for sincere deliberations despite the sweltering heat, I think we can definitely secure an abundant harvest this fall. I am certain that, through these talks today, we can make the sort of outcome expected by the international community as well as our people.”