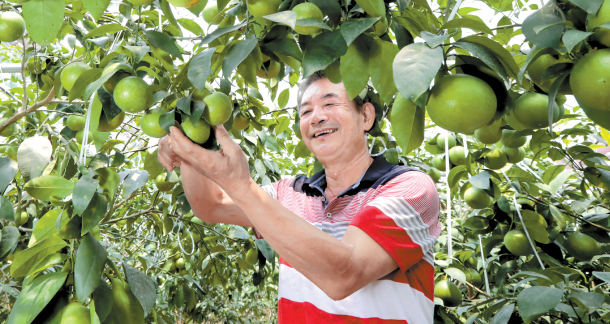 Choi Gap-seong, owner of Miraero Farm, tends to the mandarin oranges he grows in his greenhouse in Pyeongtaek, Gyeonggi. [KIM KYUNG-BIN]

The mandarin oranges hanging in Choi Gap-seong’s greenhouse look like the kind one might grow on Jeju Island, where a subtropical climate helps produce some of Korea’s juiciest crops.

The type of mandarin oranges that Choi grows, hwanggeumhyang, is a cross between two citruses native to Jeju. Beloved for their sweet flavor, the oranges were once an exclusive specialty of the island, but rising temperatures on the Korean Peninsula have moved crops further north. And with advanced technology, Choi can keep his greenhouse in Gyeonggi as warm as 37 to 38 degrees Celsius (99 to 100 degrees Fahrenheit), close to the environment of Jeju.

Choi used to harvest orchids in his greenhouse before he switched to oranges in 2014. His orchid business was once a thriving one. Every year, he exported as much as $4 million worth of orchids to China. But the floricultural industry started to dwindle around 2008, in the middle of the global financial crisis, and Choi went searching for another crop that was less sensitive to economic fluctuation.

“Although I had no experience with hwanggeumhyang, I felt pretty confident about growing something in a greenhouse,” Choi said. “And who says hwanggeumhyang can only be harvested in Jeju?”

Growing a subtropical fruit further north has its advantages. His farm is near Seoul, and Gyeonggi’s climate allows for earlier harvests. Choi can ship his oranges to customers at least three months ahead of farmers in Jeju.

Gyeonggi’s bigger temperature ranges also make the fruits sweeter and more colorful. Choi’s hwanggeumhyang have a sweetness of 14 to 16 degrees brix, at least two degrees brix sweeter than other hwanggeumhyang, and customers can’t get enough of them. Last year, Choi harvested 20,000 kilograms (44,000 pounds) of the fruit. They sold out in just 40 days. 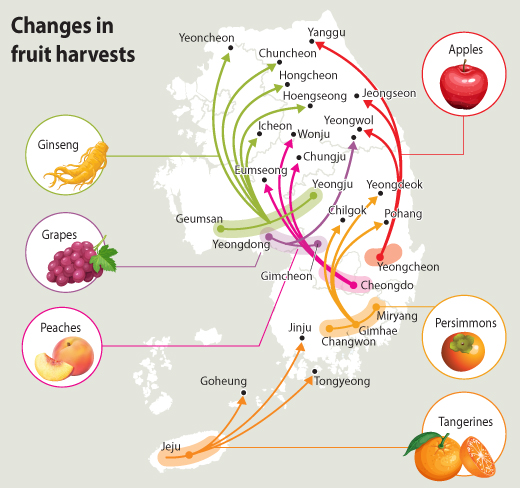 As the Korean Peninsula warms, farmers are trying to catch up with climate change. Subtropical produce like hwanggeumhyang are slowly making their way out of Jeju, and farmers there are trying to grow crops typically found in even hotter climates.

Lim Chae-yong had been planting tangerines for 17 years, but his profit shrank as the market for Jeju citruses became oversaturated. With the support of the provincial government and his local agricultural cooperative, he began growing passionfruit in 2016.

Passionfruit, which can be harvested twice a year, is now giving Lim more than seven times the profit that he made with tangerines. With the average temperature in Jeju rising - in the past 68 years, it has risen 2 degrees Celsius (3.6 degrees Fahrenheit) - more farmers are expected to start growing tropical fruits on the island.

According to a study released by Statistics Korea in April, major fruits consumed between 1970 and 2015 have all made their way up north as a result of climate change. While high-yielding citruses that used to grow only in Jeju, like hwanggeumhyang, have moved up to Gyeonggi, apples that used to grow mostly in Daegu and North Gyeongsang are now being harvested in breezy Gangwon. By 2060, only parts of Gangwon will be able to harvest apples, the Rural Development Administration said.

The seas around the peninsula are attracting different fish as well. Since 1990, fish that live in warm currents like mackerels and Japanese flying squids have been caught more and fish that live in cold currents like pollacks and sauries have been caught less. While 11,411 tons of pollacks were caught in 1970, only 1 ton was caught in 2017. On the other hand, mackerel hauls have increased from 36,246 tons in 1970 to 113,549 tons in 2017.

The reason for the change: from 1981 to 2010, the average annual temperature of the Korean Peninsula rose by 1.22 degrees Celsius, about 1.5 times faster than the global average.

“The world is changing,” said Kang Mun-seok, a researcher at the Rural Development Administration, “and farmers will have to look into demand trends to make early investments on crops, just as people did with cherries and hwanggeumhyang.”