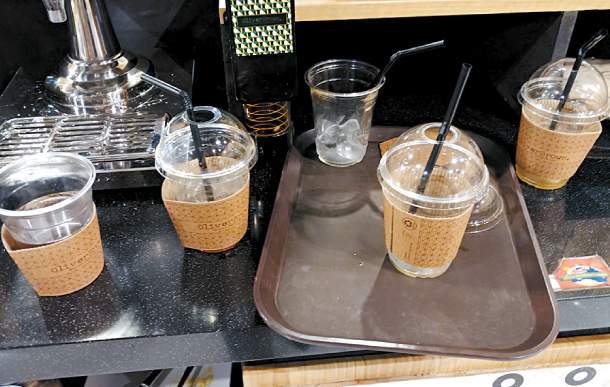 Disposable plastic cups left behind at a cafe in Seoul on Monday. [KIM JEONG-YEON]

Starting today, local governments across the country are cracking down on the use of disposable cups in cafes.

Under a directive from the Ministry of Environment, any cafe that offers disposable cups to customers who are not ordering to go could face a fine of up to 2 million won ($1,785).

In cases where a customer insists on using a disposable cup inside the cafe, the business will likely not be fined, the ministry said.

A regulation restricting the use of disposable cups to takeout drinks has been in place since 1994, but local governments have not enforced it, complaining of a lack of inspectors.

However, in May, the Ministry of Environment warned that it would ramp up inspections in three months to ensure the regulation is met.

“The measure is to help customers choose to move away from environmentally destructive choices,” Environment Minister Kim Eun-kyung said in a statement.

The ministry said it decided to push forward with the crackdown because of “increasing use of disposable products that are alarmingly destroying the environment and wasting resources.”

The move is in line with the Moon Jae-in administration’s recent push for environmentally-friendly policies. This month, the Blue House ordered all staff at the presidential compound, including the president himself, to use tumblers instead of disposable cups. On July 1, the Environment Ministry announced that all government offices would stop using disposable cups.

On Monday, many cafes in Seoul appeared ill-prepared for the inspections. One cafe near City Hall was packed during the lunch hour, and 14 out of 15 tables were occupied with people drinking out of plastic or paper cups.

“I have to go back to the office in half an hour,” said Lee Jin-ki, 34, “so I asked for a plastic cup since I might have to bring the coffee with me back into the office.”

Around 10 tables at a cafe in Yeouido, western Seoul, were also occupied during the lunch hour, but only two tables had anyone using glass cups or mugs.

However, businesses do have the option of entering into a voluntary agreement with the Environment Ministry and receiving benefits in return.

The terms of the agreement: provide mugs or glass cups to customers dining in; provide 10 percent discounts to customers who bring their own tumblers; and dispose used plastic and paper cups by handing them over to officials and registered recycling companies.

In return, the companies will be acknowledged for their efforts, the ministry said in a statement in May.

Owners of smaller cafes complained about a general shortage of employees at their cafes because providing mugs and glass cups means more dishwashing.

“My cafe is near a conglomerate and I sell about 100 to 150 cups of coffee during each lunch hour,” said one cafe owner in Jung District, central Seoul. “I don’t have time to wash all those cups. I’m afraid that if I can’t follow the regulation and the government cracks down on my business, my sales will drop.”

“For owners like me who run cafes by themselves, it’s hard to ask the customers to take mugs first and then put their drink in a disposable cup when they leave,” said another cafe owner in Mapo District, western Seoul, “and if the mugs break, that’s one more expense.”

Other cafe owners complained about a lack of notice from the government.

“I did not receive a word about the regulation,” said the owner of a cafe in Myeong-dong, central Seoul. “Shouldn’t the local government be giving out notices and set apart a time for staff training? It feels like the cafes are being scapegoated as the cause for environmental damage when there are many other factors out there harming the environment.”

“I’ve put up a notice at the cafe telling customers about possibly getting fined if they say no to using a mug or glass cup inside the cafe,” a cafe owner in Mapo District said. “But I feel bad because it feels like I’m threatening them. I think the local government can help by spreading the news about the regulation so that more customers will know about them.”

An Environment Ministry official said on Monday that while local governments will be inspecting cafes throughout the country from today, they might not start fining violators immediately.

“There will be a discussion among local governments on the crackdown on Wednesday,” a ministry official said. “The fining will start after collecting various opinions from local governments.”