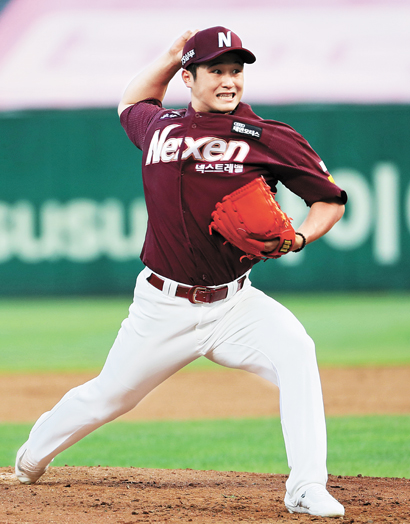 Choi Won-tae of the Nexen Heroes throws a pitch during a game against the SK Wyverns at Incheon Munhak Stadium on Tuesday. [ILGAN SPORTS]

At just 21-years-old, Choi Won-tae of the Nexen Heroes has already established himself as one of the best Korean pitchers in the KBO. 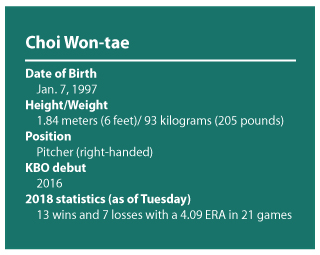 With 13 wins and seven losses, Choi shot up to the top of the Korean pitcher wins ranking. Choi now sits a good three games ahead of Lee Yong-chan of the Doosan Bears, a veteran player who is eight years his senior.

Aside from the ranking among domestic pitchers, Choi is still in contention to top the league in wins, as he is only two games behind Seth Frankoff of the Bears at 15.

In his first 20 games this season, Choi picked up 12 wins. If he continues this pace, he is likely to get around 17 to 18 wins. Of the right-handed Korean pitchers in the KBO, Shin Jae-young of the Heroes is the latest to pick up more than 15 wins in a single season, back in 2016.

“I was able to pick up more than 10 wins because our bullpen pitchers and our fielders played well,” Choi said. “I didn’t play well.”

As of Tuesday, Choi has picked up 13 wins and seven losses with a 4.09 ERA in 21 games. He only had one loss last month, against the LG Twins on July 19. During the game, Choi gave up seven runs in three innings.

“I watched the game against LG all night on my phone, analyzing the cause of my loss,” Choi said.

The night spent watching the game definitely helped Choi - he won the next two games against the KT Wiz and the SK Wyverns.

Choi joined the Heroes through the 2015 KBO rookie draft, receiving a lot of attention as the club’s next ace pitcher. During his high school career with Seoul High School, Choi showed his ability to throw a fastball at a speed of 150 kilometers (93 miles) per hour. Despite expectations, he wasn’t able to make a single appearance on the KBO mound in his first year, as he was focusing on rehabilitating his shoulder from an unknown injury.

“I’ve had different medical examinations, but I didn’t get a clear diagnosis,” Choi said. “I think there was a problem in my pitching form. Since my elbow was up high when I threw the ball, there was pressure on my arm.”

“Since I’m very stubborn, it’s hard for me to make changes on things that I believe are right,” Choi said. “From my struggle at the beginning of the season, I thought ‘I can’t continue like this’ so I found the changes.”

While Choi was making changes to his style of pitching, his role model also changed from Park Chan-ho to Greg Maddux. Though Choi now plays through each game with different control of pitches, he still hasn’t given up on his fastballs.

“Throwing at 150 kilometers per hour may be difficult, but next year, I want the speed of my fastballs to go up,” Choi said.

For two straight seasons, Choi managed to pick up more than 10 wins, but he still hasn’t accomplished one thing, representing his country. By the end of the 2017 season, Choi could have competed at the Asia Professional Baseball Championship (APBC) - a competition only open to young or inexperienced players - in Tokyo, but failed to do so. He was sent down to the Futures League due to shoulder pain towards the end of the season.

This year, it seemed as if Choi’s dreams were finally going to come true.

The ace pitcher looked like a shoo-in for the Asian Games roster, but once again, it wasn’t to be. When Sun Dong-yul, manager of the Korean national team, announced the roster on June 11, Choi’s name was once again excluded.

“[Joining] the national team isn’t something I can do just because I want to,” Choi said. “I didn’t get selected because I wasn’t good enough. I’m not a perfect player yet.”

“I don’t have any expectations,” Choi said. “I’ll be on the national team eventually. But since I don’t know when, I’ll be trying my best in every single game.”