Kang Bo-ra hopes to be the future of taekwondo

Kang Bo-ra hopes to be the future of taekwondo

Kang Bo-ra is hoping to be the country’s newest taekwondo star at the Jakarta Palembang 2018 Asian Games. 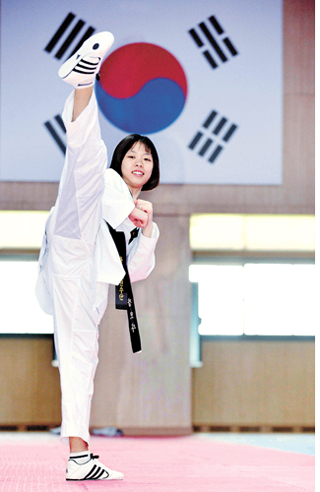 “The Asian Games is the second biggest tournament after the Olympics,” Kang said. “I am nervous, but I can’t wait to compete.”

At the Asian Games, which kick off on Aug. 18, Kang will compete in the women’s -49 kilograms (-108 pounds) and hopes to win gold for Korea.

“Along with Lee Dae-hoon on the men’s team, Kang Bo-ra is the most likely athlete to win gold [at the Asian Games],” said Kim Yong-ki, head coach of the Korean national taekwondo team.

Unlike other notable taekwondo athletes on the Korean team, Kang is a new addition. At age 17, Kang became the youngest member on the Korean national taekwondo team when she was named to the squad in May. In February, Kang defeated Kim So-hui, a gold medalist at the 2016 Rio Olympics, and in May, she defeated Sim Jae-young, a gold medalist at the World Taekwondo Championship, to earn her spot on the national team.

Kang continued her stride in her first senior tournament. At the 2018 Asian Championship in May, she won a gold medal by defeating Panipak Wongphattanakit of Thailand, who was ranked No. 1 in women’s -49 kilograms.

“I’ve been a coach for more than 30 years, but this is the first time I’ve become a fan of an athlete,” Kim Yong-ki said.

Though Kang is not tall at 1.65 meters (5 feet 5 inches), she is threatening at close range. Kang started taekwondo two years after she started learning taekkyeon, a different traditional Korean martial art, at age four.

“Since she has the movement of taekkyeon, her kicks are different,” Kim said. “When she makes a kick towards the face, it comes from an unexpected angle. This even confuses the veterans. Not only that, since she’s still in high school, I have very high expectations. She’ll be even better in two years at the Tokyo Olympics.”

In Kang’s first open tournament, the 2018 Jeju Korea Open International Taekwondo Championship, she won three straight matches by more than 20 points. In the final, Kang had a big 50-12 win in the women’s -46 kilograms by defeating Malakoutikhah Maryam of Iran.

“It’s a big misjudgment if athletes think of Bo-ra as just a high schooler,” Kim said. “No matter how tough her training is, she always gets it done.”

Kang’s role model is Lee Dae-hoon on the men’s team, who will compete at the Asian Games to defend his title for the third straight time.

“It feels like a dream that I can practice on the same mat with someone who was my role model since I was little,” Kang said. “I will make my dream come true and become the ‘female Lee Dae-hoon.’”