Kenyan-born marathoner Wilson Loyanae Erupe has acquired Korean citizenship, capping off a journey that began more than three years ago. 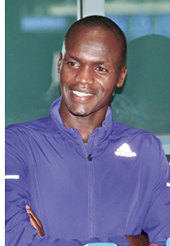 He failed in his previous bid in April 2016. But he has been competing for a Korean municipal government since June 2015.

According to Oh, Erupe will adopt a Korean name, Oh Joo-han, which translates into “I run for Korea.”

Erupe once hoped to represent Korea at the 2016 Summer Olympics.

Erupe’s personal best time in the marathon is 2:05:13, set at the Seoul International Marathon in March 2016. The current Korean national record is 2:07:20, set by former Olympic silver medalist Lee Bong-ju in 2000.

Oh Chang-seok believes Erupe can fight for a spot on the podium at the 2020 Tokyo Olympics, but recent rules by the International Association of Athletics Federations (IAAF) on transfer of allegiance will make Erupe ineligible.

Under the rules adopted last week at an IAAF council meeting with immediate effect, athletes must wait three years after switching allegiance before representing their adopted country. Erupe will make his first appearance as a Korean citizen at the Gyeongju International Marathon on Oct. 21.

Erupe’s pursuit of a Korean passport once divided the local athletics community. Some said he could provide a much-needed boost for Korean marathon running, which has stagnated for years. No Korean has made it under the 2:10:00 mark since Jeong Jin-hyeok’s time of 2:09:28 in 2011.