While the domestic economy has been showing concerning signs, Korean exports are still strong, with monthly exports exceeding $50 billion for five consecutive months for the first time ever. 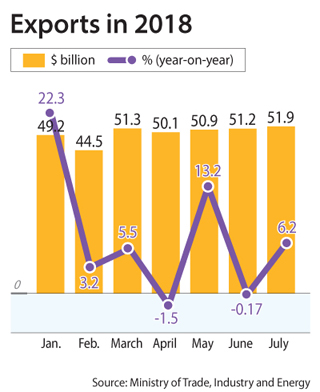 According to the Ministry of Trade, Industry and Energy, Korea exported $51.9 billion of goods overseas in July, a 6.2 percent increase over a year ago.

These export figures were the second-largest after September 2017’s record of $55.1 billion. Korea has now run a trade surplus for 78 months, the longest period in the country’s history.

However, the ongoing trade protectionism pushed by the United States and intensifying trade friction between the United States, China and Europe raises questions over how long Korea’s export boom will last. The growth in semiconductor exports, the biggest contributor to Korea’s strong streak, has fallen in the past two months.

“Despite the unfavorable conditions, including the intensifying trade conflict between the United States and China as well as toughening import regulations from major countries, our exports have fared well, reaching the second-largest export figure. For the first time, we exported $50 billion [of goods] for five consecutive months,” said Paik Un-gyu, the Minister of Trade, Industry and Energy.

Semiconductor exports continued to push up Korea’s exports, while the automotive sector struggled.

In July, $10.4 billion worth of semiconductors were exported, a 31.6 percent increase compared to the same month a year ago.

This was the third consecutive month of computer chip exports exceeding $10 billion, and marked the 22nd consecutive month of year-on-year growth in the sector. General machinery exports also grew significantly thanks to the growth of the manufacturing and construction industries in the United States and China. Machinery exports, which only managed to grow by 1.5 percent in June, rose by 18.5 percent in July.

Petroleum exports also grew by 45.2 percent thanks to rising international crude prices. However, their growth slowed compared to June’s 71.5 percent

On the contrary, automobile exports continued to decline further. Exports of automobiles fell 13.5 percent last month to $3.2 billion, sliding further from their 9.9 percent drop in June. Since February, Korean auto exports have been declining.

Exports to the United States fell by 2.6 percent, while those to Europe suffered a sharper drop of 9.5 percent and those to the Middle East fell by 7.2 percent.

Moody’s Investors Service on Wednesday released a report on its concerns over the continuing trade dispute between the United States and China. It noted that U.S. tariffs on imported cars and automotive parts will harm Korea’s automotive exports.

“Korean automakers might increase their U.S. production,” the Moody’s report said. “But it would prove insufficient to cover current U.S. sales.”

Concerns over the semiconductor industry’s ability to power Korean exports are also rising. Growth in semiconductor exports has been shrinking for two consecutive months. After posting a 44.4 percent year-on-year increase in May, they fell to 39 percent in June and then to 31.6 percent in July.

“While our economic indicators are disappointing, exports are becoming [a major] pillar of our Korean economy,” said Kim Sun-min, director general for international trade policy at the ministry.

Kim said one of the main contributors to the strong performance of Korean exports was favorable global market conditions. He also said that the declining semiconductor exports weren’t something to be worried about.

“The key to the fourth industrial revolution is semiconductors,” Kim said. “The monthly ups and downs have nothing to do with the overall trend. [Exports of semiconductors] will continue to grow.”